She’s never been one to be shy when it comes to flaunting her amazing toned curves.

Now back at her East Coast digs, Emily Ratajkowski stunned in an earth-toned body suit that showcased her undergarments during a dinner with her husband Sebastian Bear-McClard in the East Village neighborhood in New York City.

And to make things more of a family affair, the couple brought along their beloved pet pooch Colombo.

Revealing: Emily Ratajkowski, 29, was nothing short of a head-turner in a see-through ensemble when she arrived for dinner in Downtown New York City on Friday

Thinking safety first, amid the ongoing COVID-19 pandemic, the I Feel Pretty star wore a black protective mask when she arrived at the ATLA restaurant in Downtown Manhattan.

But within a New York minute, all eyes turned to Ratajkowski and her see-through outfit from her Inamorata Woman brand Mesh Collection.

The sheer fabric gave gawkers a pretty clear view of her black bra and matching underwear.

She rounded her ensemble out with her new new dyed blonde tresses that was styled long and with a part in the middle. 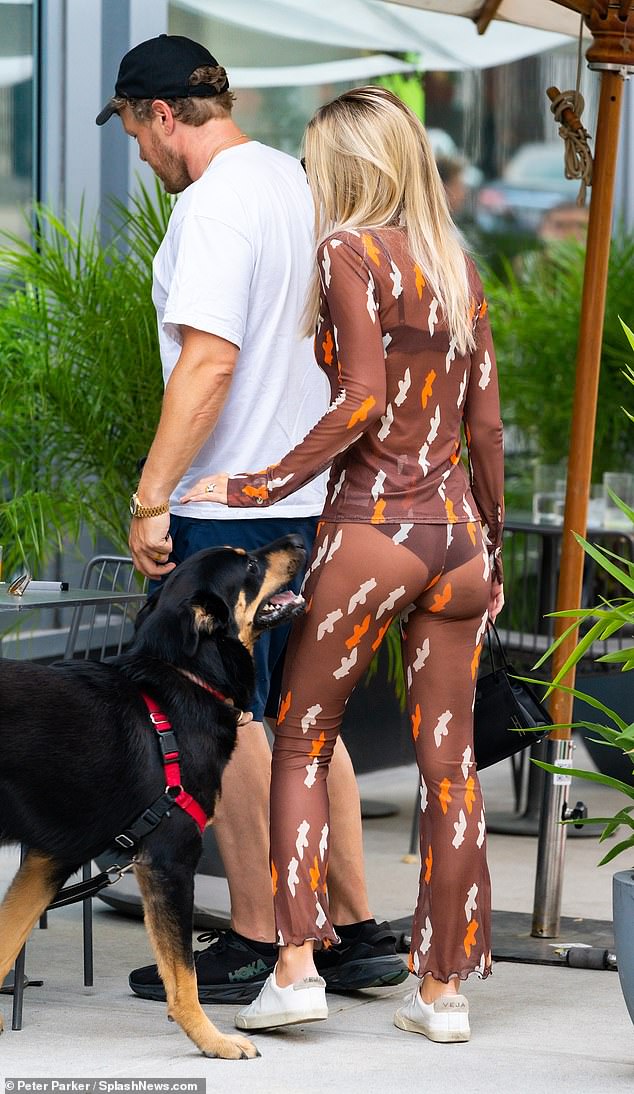 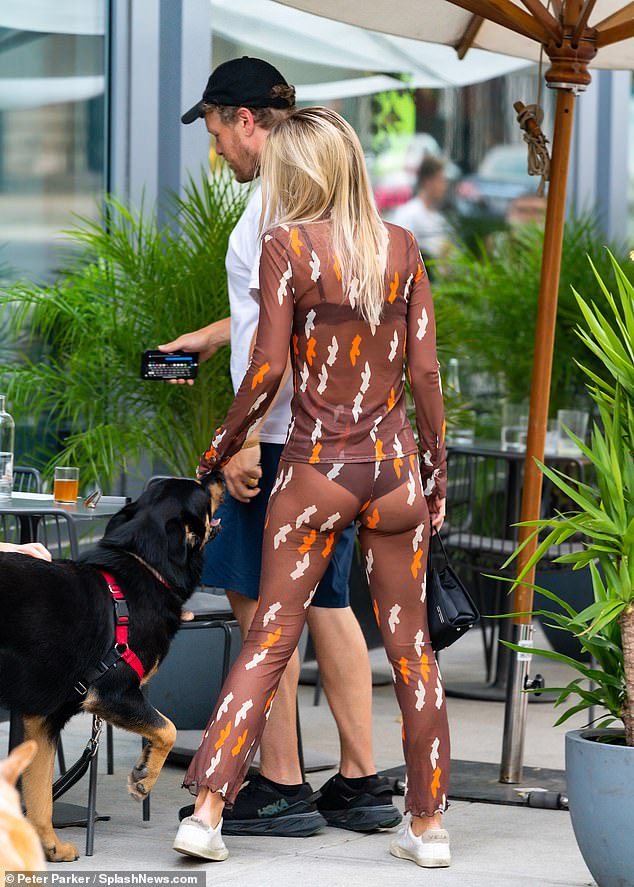 Own best advert: The outfit is from Ratajkowski’s Inamorata Woman brand Mesh Collection.

Grand arrival: The British-born star donned dark sunglasses and a black protective mask when she arrived, but that eventually came off as the dinner date went on

The lifelong brunette also made sure to give her social media 26.6 million Instagram followers a glimpse of the look from several angles.

She posted several photos of herself in the revealing outfit on her Instagram Story, which included zeroing in on her toned derriere and ample assets.

There’s also a quick video of herself laying in bed in a colorful top as she played with her hair.

The beauty debuted her new status of a blonde bombshell on her Instagram page just this week for the brand Kerastase. 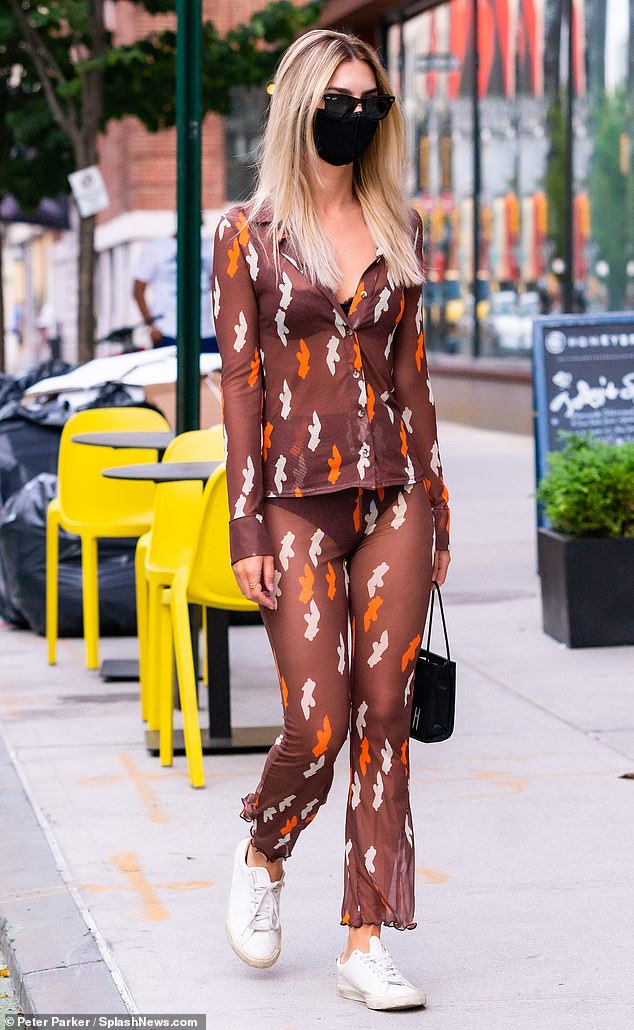 Accessorizing: The fashionista also carried a black purse for the outing 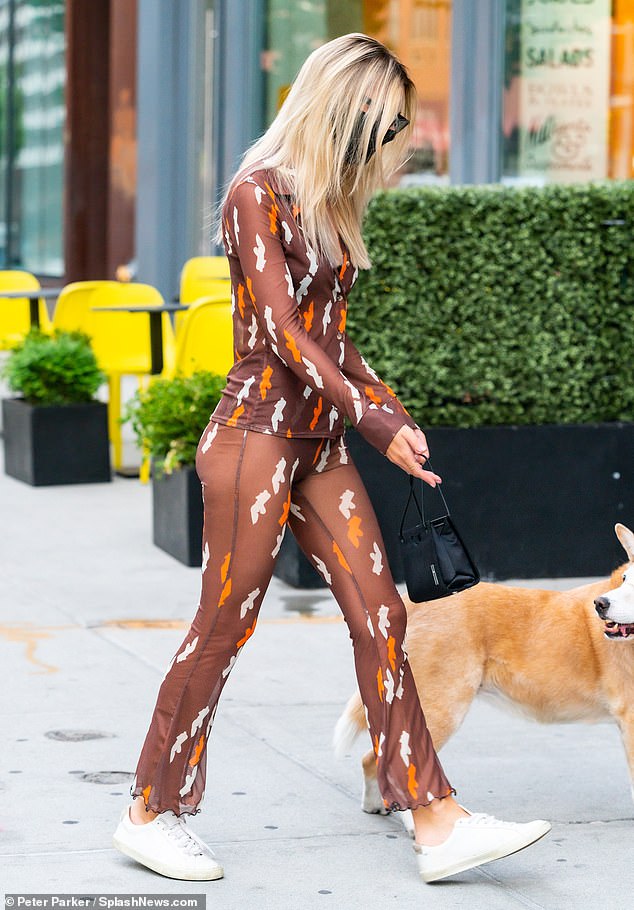 Accessorizing: She also tried to kept in casual by wearing white sneakers 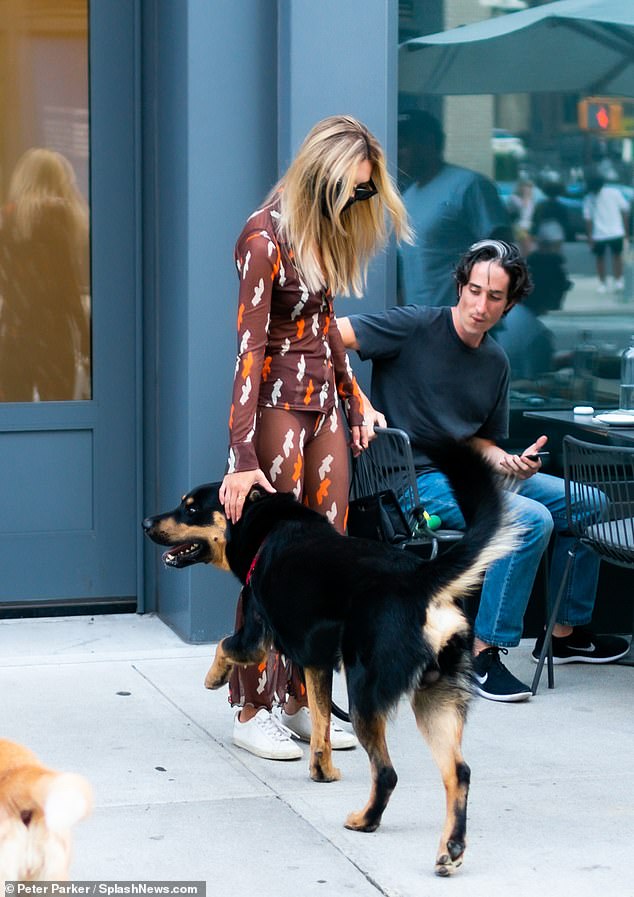 Four-legged family members: Ratajkowski kept her beloved dog Colombo close to her side

For over two years the sizzling sensation has been the face of Kerastase, a Paris-based brand that is a subsidiary of L’Oreal.

Firing up her Instagram this Wednesday, she uploaded a string of smoldering bikini snaps to celebrate ‘Day 1 as a blondie.’

Ratajkowski, Bear-McClard and their dog Colombo had been hunkering down at their West Coast home in the Venice Beach neighborhood of Los Angeles. 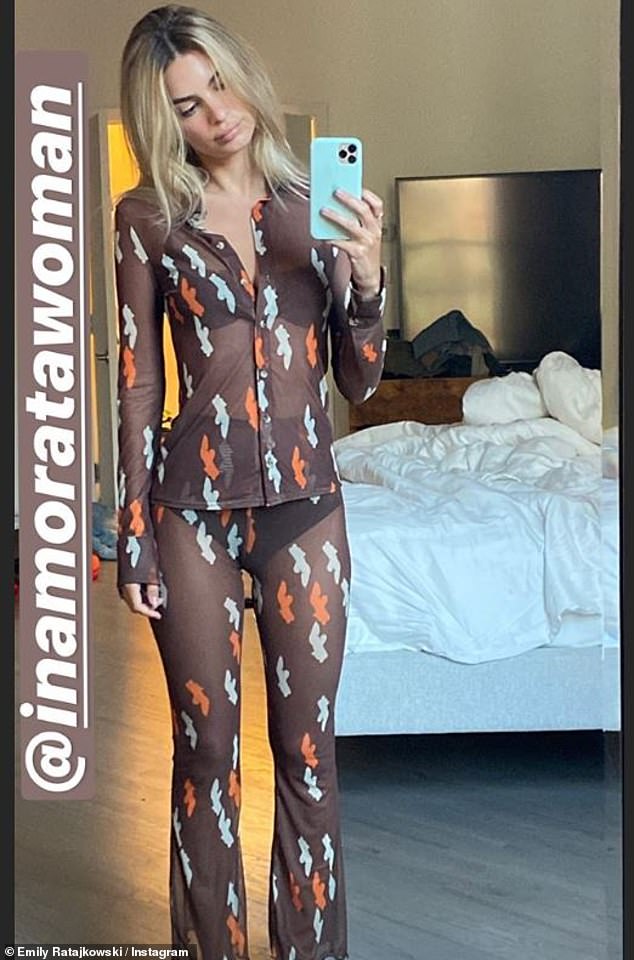 Sizzling sensation: Ratajkowski also proved she is still her own best model as she plugged her line Inamorata Woman on Insta Stories this Friday 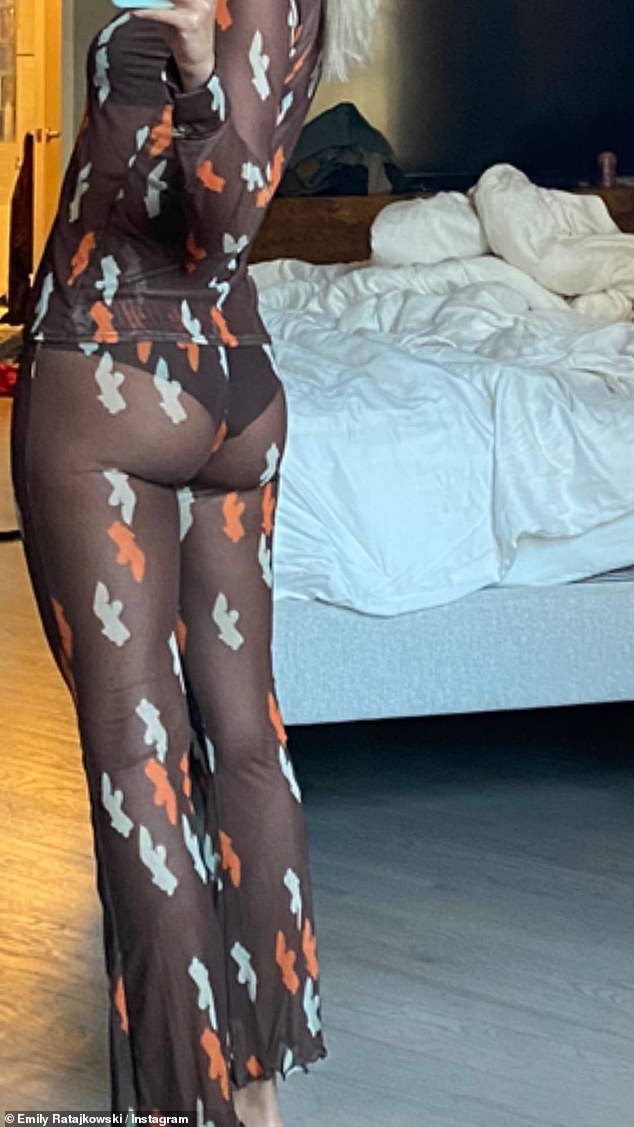 Baby got back: The 29-year-old focused on her bombshell figure when she posted pictures of herself in the see-through outfit from her brand’s Mesh Collection

The couple were initially quarantining in New York City when the pandemic reached a fever pitch, but when things turned from bad to worse in the New York/New Jersey regions in mid April,  they flew to Los Angeles.

The Centers For Disease Control And Prevention had issued an advisory on March 28 asking ‘residents of New York, New Jersey, and Connecticut to refrain from non-essential domestic travel for 14 days effective immediately.’

This past Sunday model and entrepreneur wished a happy Father’s Day to her own ‘Papa’ John David Ratajkowski and to Sebastian, who’s ‘Colombo’s Dad.’ 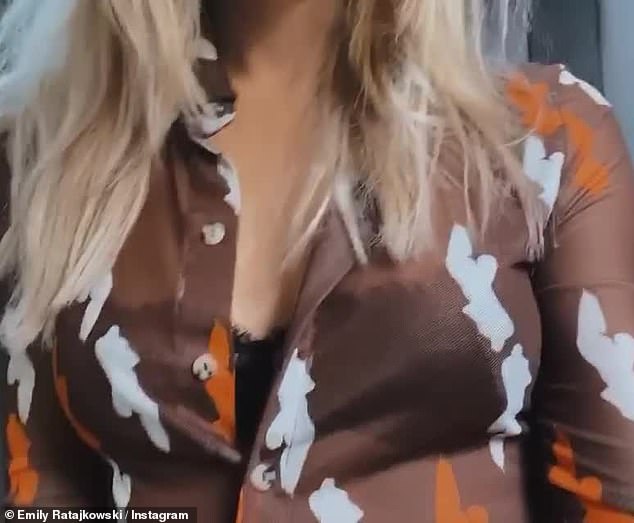 Terrific: The lifelong brunette, who went blonde earlier this week, made sure her fans caught a glimpse of the look from several angles 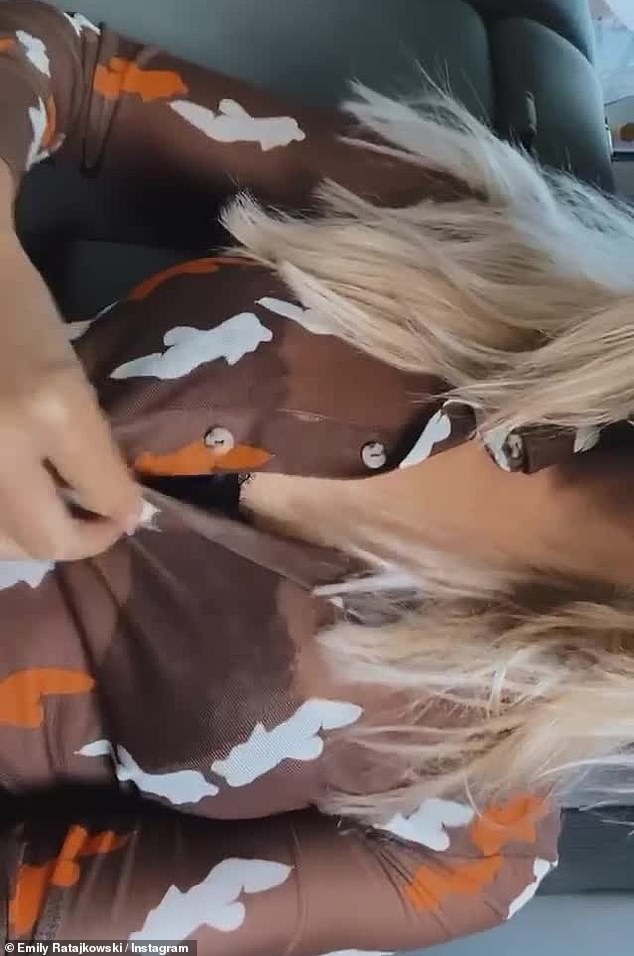 Smoldering: In one close-up post she made sure her 26.6. million followers could catch sight of her black lace bra as she played with her hair 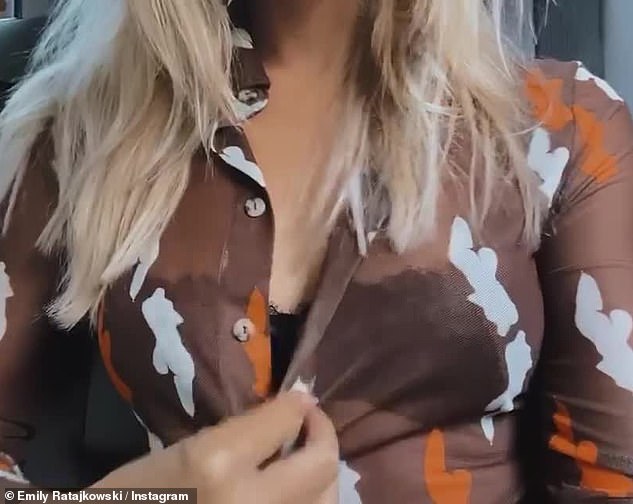 Looking fab: Emily debuted her new status as a blonde bombshell on her Instagram page this week for the brand Kerastase

How to sleep: How sleep is affected by alcohol – expert weighs in with tips to improve it 0

Chris Wallace: Kamala Harris is a 'shape-shifter,' making it harder for Trump to attack 0