COVID: EU pulls out all stops to boost vaccine rollout

The European Union has drawn flak over the past few months for the sluggish pace of COVID vaccine rollout across the 27-nation bloc. Brussels has

Covid treatments: Major boost in drugs treating coronavirus patients
How to live longer: Physical activity can boost longevity by up to six years says study
Almost two thirds of children have turned to music to boost their mood in the past year


The European Union has drawn flak over the past few months for the sluggish pace of COVID vaccine rollout across the 27-nation bloc. Brussels has been responsible for negotiating vaccine procurement contracts with suppliers and distributing shots to member states.

But the EU’s inoculation drive lags that of places like the United Kingdom, the United States and Israel, causing widespread consternation and growing frustration among the region’s public.

So far, only about 12.8% of EU citizens have received at least one shot of the vaccine, compared with 31% in the US and 46% in Britain, according to figures from Our World in Data.

The EU has been bit by a massive shortfall in deliveries ever since the first shots were delivered at the end of last year. The troubled rollouts have become a major political issue.

The delays and setbacks have been exacerbated by the Anglo-Swedish pharma giant, AstraZeneca, repeatedly slashing delivery forecasts for the region. The company has so far delivered less than half of what it committed to initially.

For instance, it had promised 30 million doses by the end of March, but only delivered 17 million. 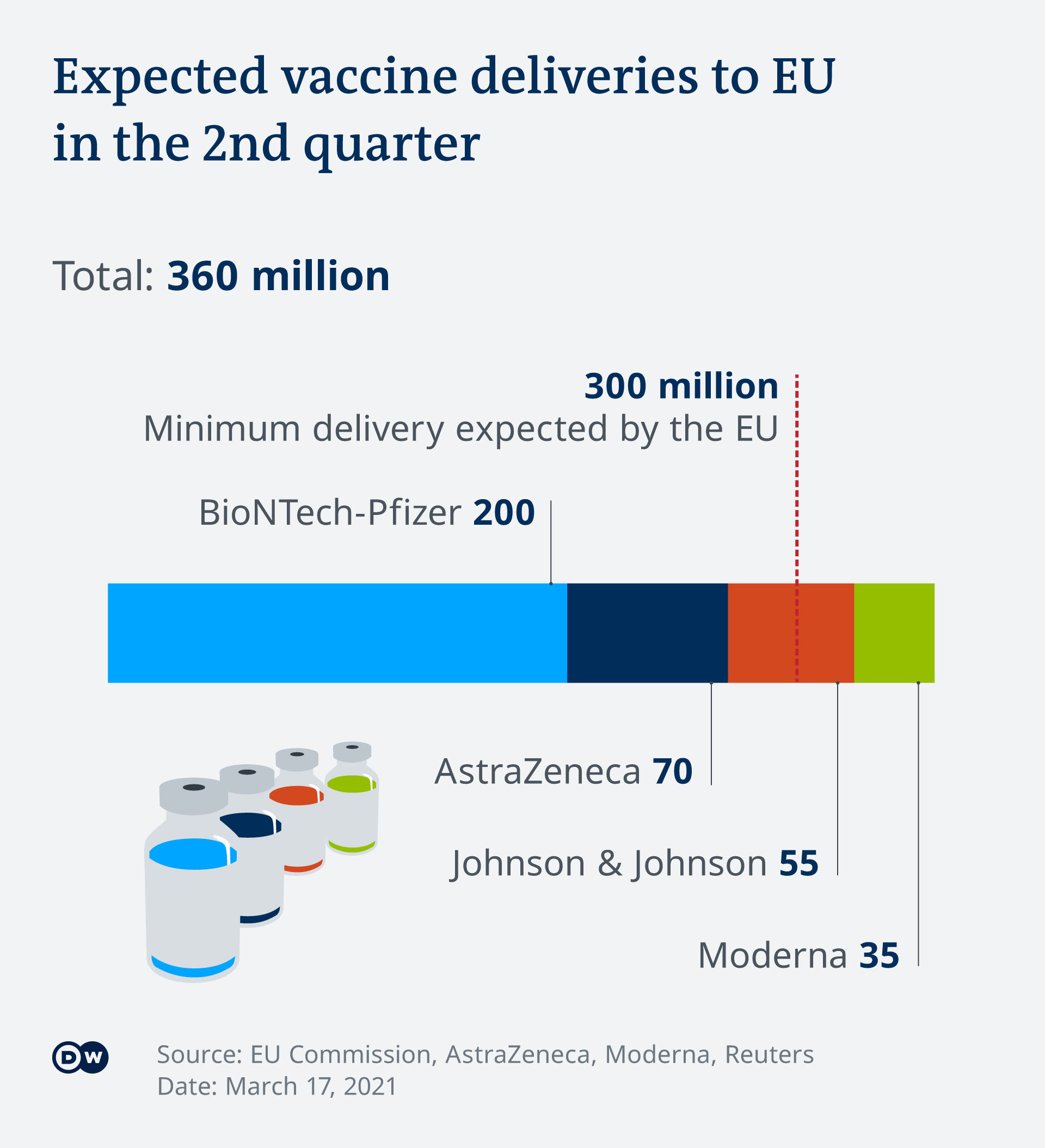 The hiccups in vaccination rollouts have put in jeopardy the European Commission’s target of having a minimum 70% of the entire adult population inoculated by the end of the summer.

But Brussels is counting on a strong second quarter of vaccine production to reach its goal.

With some 107 million doses already distributed and up to 360 million slated for the next 3 months, the EU said the target was within reach.

“We believe that on the basis of this, we will have enough doses of the vaccine to reach our very important target of about 70% of the adult population,” the Associated Press news agency quoted EU Commission spokesman Stefan De Keersmaecker as saying.

“That would leave us in a situation where we have sufficient community immunity to fight the virus,” he said. 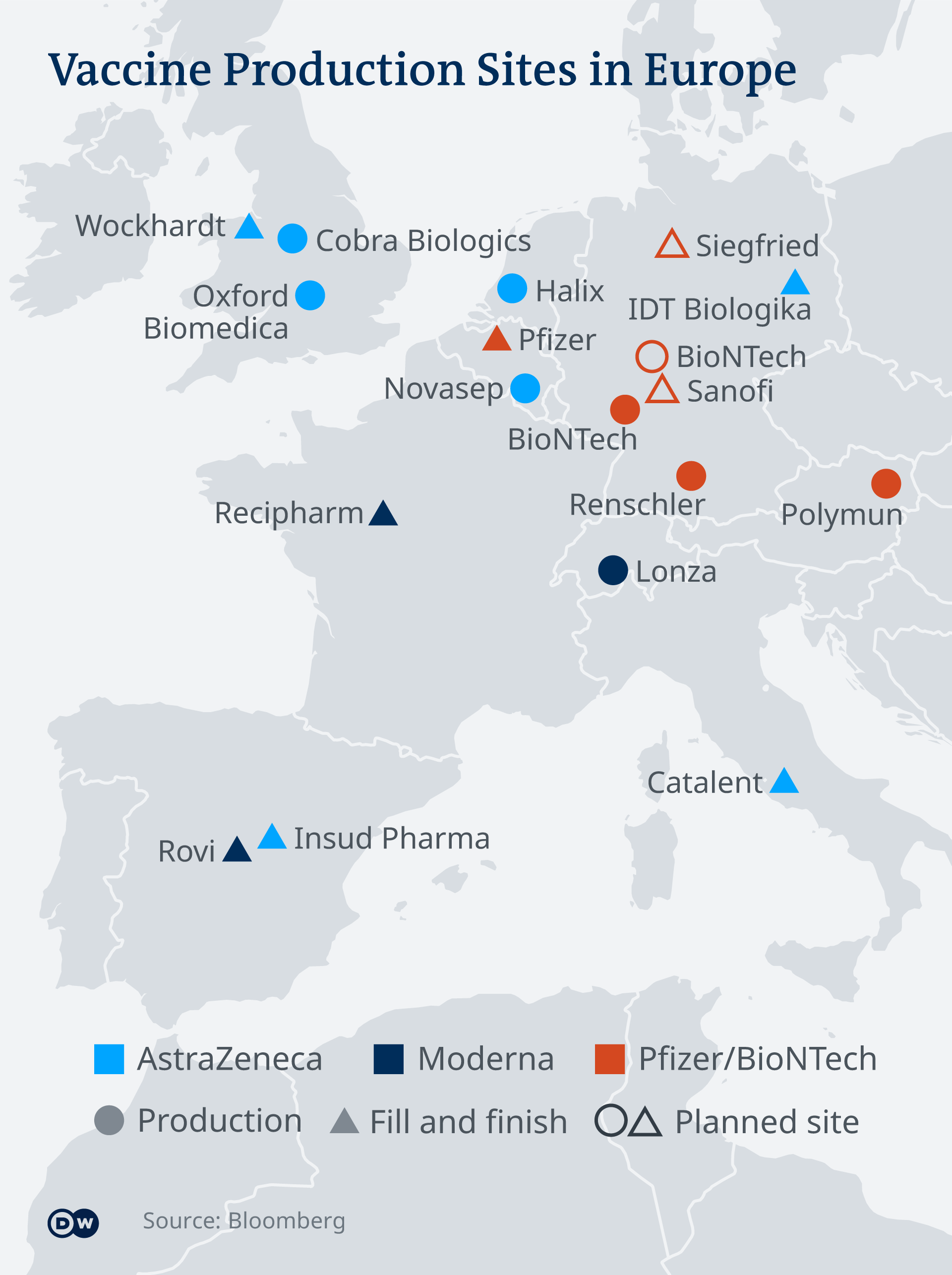 In a bid to boost production in the bloc, the European Medicines Agency (EMA) recently approved new BioNTech-Pfizer, Moderna and AstraZeneca manufacturing sites.

The Amsterdam-based agency, which is Europe’s top drug regulator, approved sites in the Netherlands, Germany and Switzerland.

The plant in the Dutch city of Leiden is making the active substance for AstraZeneca’s vaccine, while Germany’s Marburg site is producing that of BioNTech-Pfizer. A plant in Visp, Switzerland, contributes to Moderna supplies.

The first deliveries of the BioNTech-Pfizer vaccine manufactured in Marburg are planned for the second half of April. BioNTech says it plans to produce up to 250 million doses of its vaccine at the site in the first half of the year.

EMA also loosened regulations for how long the BioNTech vaccine must be stored at ultralow temperatures.

The moves could speed up the bloc’s lagging vaccine production and distribution.

Still, some vaccine makers like Germany’s CureVac say they are facing challenges in boosting production in Europe.

One of the company’s founders, Florian von der Mülbe, told German newspaper Rheinische Post in an interview published on Wednesday that global supply chains for making COVID-19 vaccines have been disrupted by US restrictions, creating problems for companies seeking to build up production in Europe.

He pointed out that suppliers in the United States were required under the Defense Production Act to meet the needs of the home market first.

“Global supply chains are disrupted,” von der Mülbe, now CureVac’s chief production officer, said. “Be it chemicals, equipment, filters or hoses: US manufacturers are obliged first to meet American demand, and that means we are slipping down the list.”

CureVac said its mRNA-based vaccine candidate could win emergency European approval this quarter and confirmed a forecast that it would produce 300 million doses this year.

To increase vaccine supply to the bloc, the EU has also tightened its oversight of coronavirus vaccine exports, giving it greater scope to block shipments to countries with higher inoculation rates such as Britain, or which are not sharing doses they produce.

But not everyone views vaccine export restrictions positively.

Speaking to DW recently, Rachel Silverman, a global health policy expert at the Center for Global Development in Washington D.C., says that export bans “tend to be a pretty bad idea” for a number of reasons.

“The first is that they’re often not entirely effective and they might be effective at preventing the export of those specific vaccine doses.”

Moreover, there is a “diplomatic benefit” to being seen as sharing your vaccine,and being generous with vaccines, she says, adding: “Countries around the world are appreciative of countries that are generous, sharing, globally minded, and they will get credibility from being generous in this way.”

Max Lucado: COVID's toll — to our front line workers, this is a message just for you 0

Out of obscurity, Mercedes and Mullins shine early 0