TERRIFIED locals in the coronavirus epicentre face TWO DAY waits to see a medic – amid claims China bullied world health chiefs into playing down the outbreak.

The shocking news comes as those trapped in bug-ravaged Wuhan told of horrific doomsday-like scenes on the deserted streets of the crisis-hit city.

There are now reports of desperate people going into panic mode after being told they will to have wait hours or even days to find out if they are infected.

One resident, Xiaoxi, 36, said she had spent the past week taking her sick husband from hospital to hospital in a desperate attempt to get him tested for the virus.

She told the South China Morning Post Wuhan felt like “doomsday” before adding : “I don’t know if we will both live to see the new year.

Earlier China’s president warned of a “grave situation” as he worryingly revealed the killer virus was now “accelerating its speed”.

Xi Jinping held a special government meeting  to discuss the spread of virus that has already killed 41 people and infected more than 1,300 globally.

However, experts are now asking why the Chinese authorities are only now taking action – weeks after the first case of of coronavirus was reported. 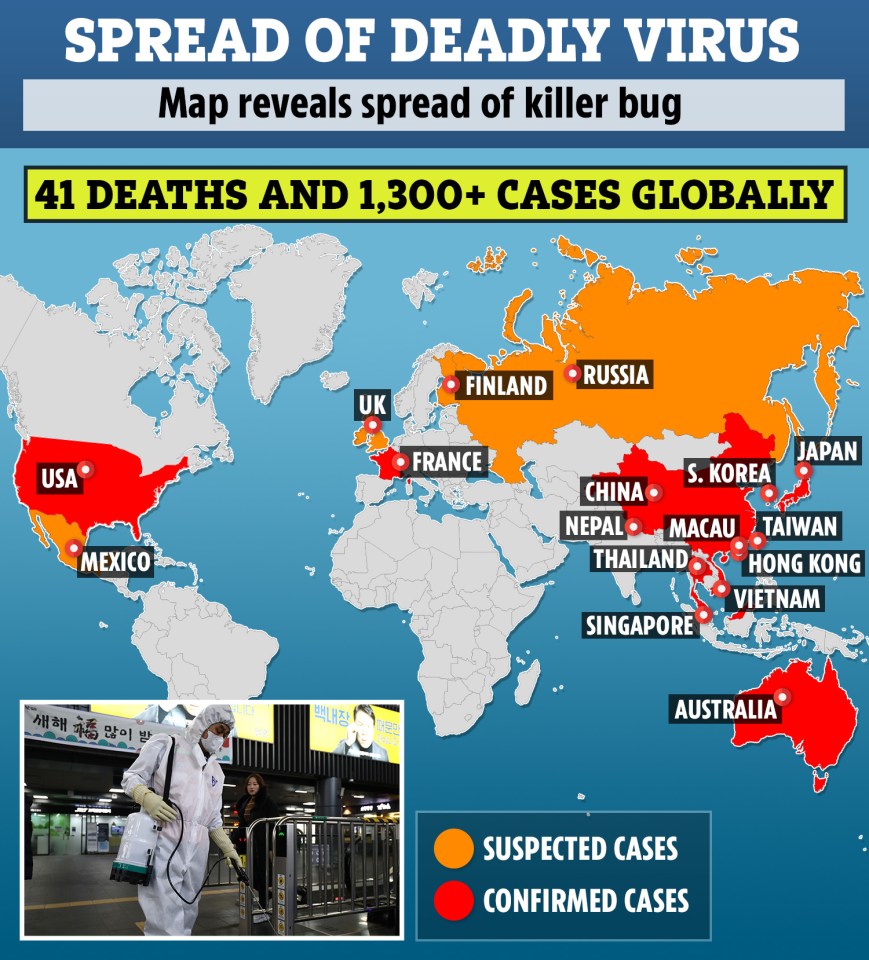 Sophie Richardson, a director at Human Rights Watch, told The Telegraph: “From a medical and human rights perspective, it is essential in these situations that people can trust the information available.

“I have real concerns about people who are supposedly ‘spreading rumours’ being harassed by authorities, especially at a time when people are concerned they are not getting accurate information.”

Some observers even believe the Chinese state could have deliberately silenced medical experts raising the alarm about the virus.

It has also been reported some of those who tried to alert the world to the growing medical crisis in China were ARRESTED.

The “bullying”concerns comes amid claims the superpower may have influenced the World Health Organisation’s decision not to declare coronavirus an international emergency.

On Thursday the organisation said it was ‘too early’ for such a decision but added an emergency could still be declared if the outbreak continues to spread.

However, some observers fear the WHO decision may have been influenced by China exerting its growing might.

In the past it has been reported Beijing’s persistence encouraged the WHO to include traditional Chinese medicine in its traditional compendium.

China has been turned into an eerie ghost town with many cities forced to cancel New Year celebrations as the coronavirus epidemic spreads.

There are now 56milllion residents in 18 cities placed on lockdown across China as the country desperately grapples with the spread of the deadly virus.

Wuhan, where the coronavirus was first reported, has become a deserted ghost town despite 11million people living there.

Shopping centres and schools have also been abandoned after officials restricted travel in the virus epicentre.

Public transport has also been suspended in ten other cities, temples shut and even the Forbidden City and part of the Great Wall closed.

Authorities in Wuhan announced yesterday they were building a 1,000-bed hospital in a matter of days.

A second emergency hospital is going to  build within weeks and house 1,300 beds, according to the People’s Daily.

Chinese authorities have already scrapped Lunar New Year celebrations for today to prevent the spread of the highly-contagious virus.

Major tourist attractions such as Shanghai’s Disneyland theme park, the Badling section of the Great Wall of China and Beijing’s Forbidden City is also shut today.

Residents 14 cities in the Hubei province, which is where the epicentre of the outbreak, have been banned from travelling, according to state-run Global Times.

Seven million people in Huanggang have been told not to leave after there were confirmed cases.

And at least one million residents in Ezhou are unable to travel after the rail stations were shut.

The government has sent 450 military medical staff, including those who have experience in fighting against SARS or Ebola, according to People’s Daily.

Medical staff are wearing adult diapers because they don’t have time to use the toilet in between treating patients, it has been reported.

ITV hiring psychologist to support cast and crew of shows including Love Island in...

Lisa Armstrong shares her heartache as she remembers her late dad in emotional New...

Farage is a friend of mine, but his vanity and ego make him a...

Holly Willoughby looks stunning as she goes bare faced in the snow before heading...

HOLLY Willoughby looked breathtaking as she shared a fresh faced snap of herself on a skiing holiday. The 39-year-old beauty posted the make-up free...

LAURA Whitmore has shared a heartfelt Instagram post ahead of the Love Island finale. The host, 34, admitted to feeling “so many emotions” as...

TYSON FURY partied the night away in style after his stunning TKO win against Deontay Wilder in Las Vegas. The Gypsy King delivered upon...

DANCING on Ice’s Perri Kiely has scored the first 10s of the series – but just missed out on a perfect 40. The Diversity...

A BITTER snap could bring snow to parts of London and the South East tomorrow as Met Office forecasters warn there could be...

Holly Willoughby looks stunning as she goes bare faced in the snow before heading...