CHINA has scrapped major New Year celebrations as 10 cities are placed on lockdown amid the coronavirus outbreak.

More than 20million people in the Hubei province, which is where the epicentre of the outbreak, have been banned from travelling as experts fear the deadly virus is becoming impossible to contain.

But residents have have blasted authorities for waiting a month to put the city on lockdown.

Officials in the Chinese capital have scrapped events including temple fairs, which usually attract thousands of tourists.

Beijing authorities announced on social media that the move was to help epidemic prevention and control.

Beijing Tourism Net said the Beijing Ditan and Longtan Temple Fairs – scheduled for January 25 to 29 – would be cancelled.

Locals in Wuhan, which has a population of 11 million, have been told not to travel, to avoid crowds and minimise public gatherings despite Chinese New Year being two days away.

Latest figures suggest the number of coronavirus cases in China has risen to 616.

The virus could now be declared a global health crisis after cases of the mystery bug previously quadrupled in just four days.

Police, SWAT teams and paramilitary troops have been out on the streets patrolling the railway stations as authorities have banned travelling on subways and ferries. 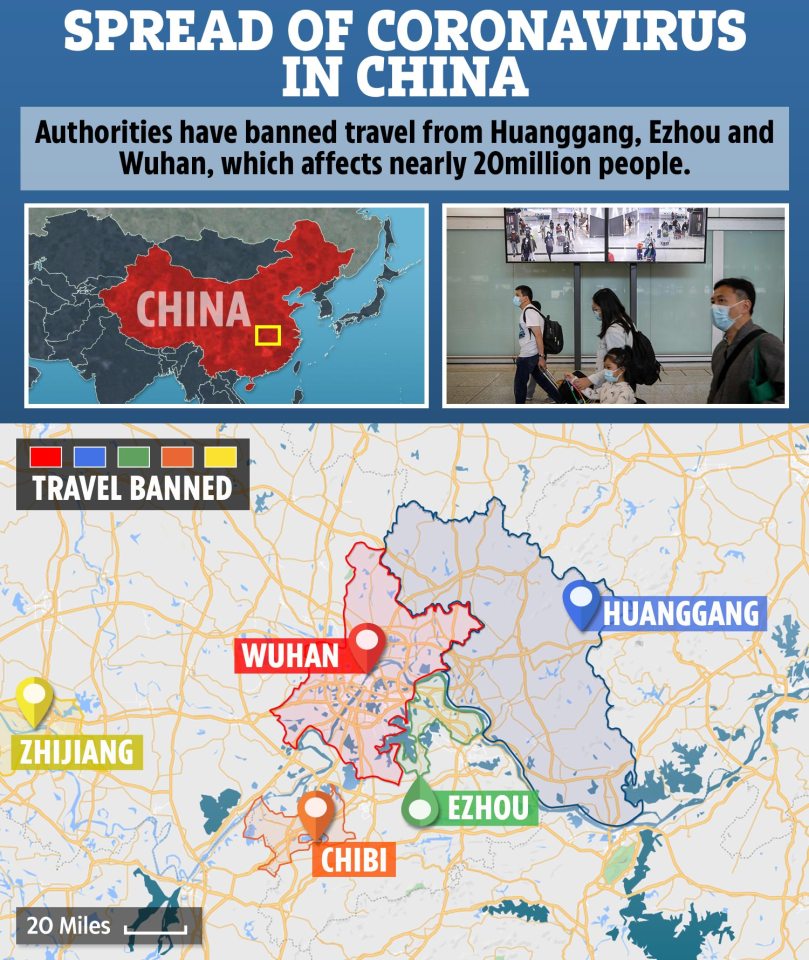 The airport and train stations have been shut down to outgoing passengers travelling after 10am local time.

John Spencer, chair of Urban Warfare Studies at the US Military Academy Modern War Institute, said it is impossible to shut an entire city down.

He told Wired: “It would be nearly impossible to be effective, even if you threw the entire Chinese military at it.

“You’d have to have a coast guard, a military. It’s just not feasible to seal in a major city in the modern age. It wasn’t even feasible before.”

Xiao, 26, a primary school teacher in Wuhan, told The Guardian: “When I saw the news when I woke up, I felt like I was going to go crazy. This is a little too late now. The government’s measures are not enough.”

Others criticised local authorities on the social media platform Weibo as #PrayforWuhan was trending.

One said: “It’s been a month since the first case was discovered and only now do they think of closing the city? This Wuhan emergency response is a little slow, right???”

Another added: “The government needs to address this. If things become too expensive, people will definitely panic and when people feel unsafe, terrible things happen. Right now people are fighting over supplies, soon they may just be fighting.”

Locals have shared images of their stockpiles of instant noodles and snacks on the social media platform Weibo.

One wrote: “No more going out … so I won’t get sick. Hope Wuhan can get some support soon.”

Supermarket shelves are empty as residents have started stockpiling goods to keep themselves isolated at home to avoid contracting the virus.

Cake Liu left Wuhan last week after visiting her boyfriend there and said that while everything was normal then, the situation has since changed rapidly.

She said: “(My boyfriend) didn’t sleep much yesterday. He disinfected his house and stocked up on instant noodles. He’s not really going out. If he does he wears a mask.”

Petrol stations have been rammed with motorists trying to get as much fuel as possible amid rumours reserves had run out.

Pharmacies have sold out of face masks, residents said.

Seven million people in Huanggang, which is 45 miles away, have been told not to leave after there were confirmed cases.

And at least one million residents in Ezhou are unable to travel after the rail starions were shut.
The Sun Online travelled to the deadly epicentre as cases rapidly have continued to skyrocket.

Travelling to and from the smaller cities of Chibi and Zhijiang have also been banned.

The virus has spread from Wuhan to other parts of China as well as South Korea, Singapore the US and Thailand.

In Vietnam, a father and a son from China have tested positive for the virus.

There have been reported suspected cases in Saudi Arabia, Australia and Russia. 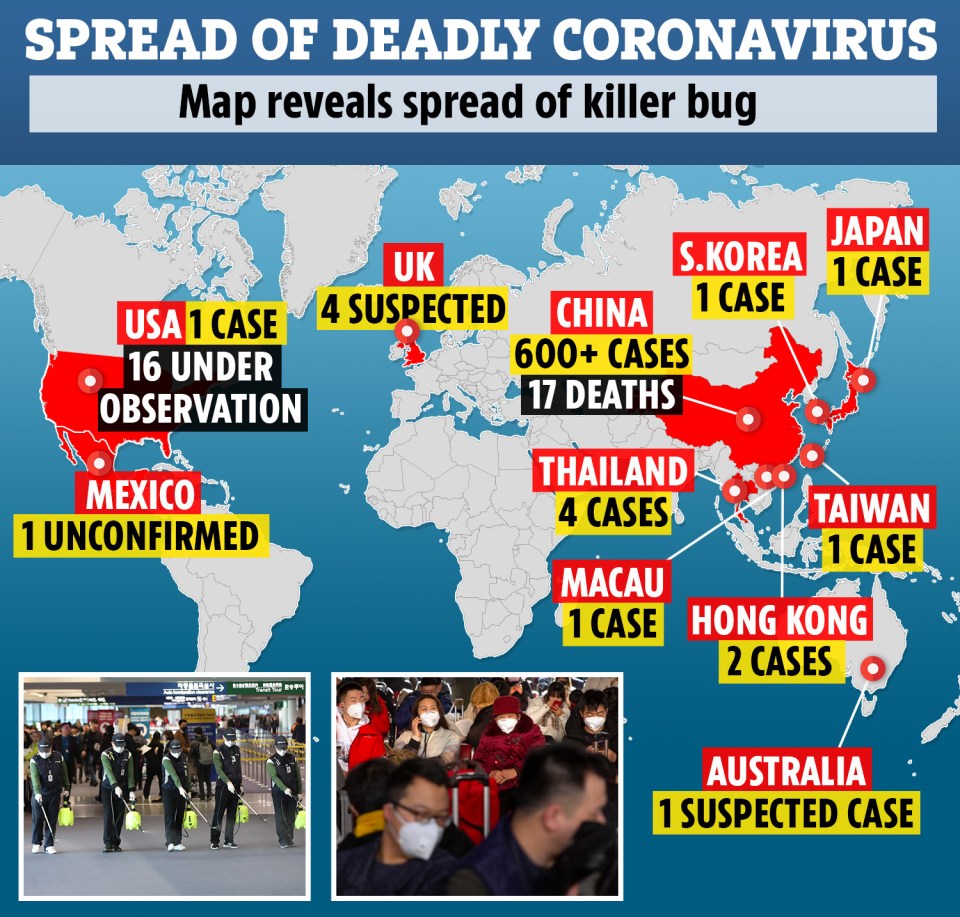 “DO NOT GO TO WUHAN”

Our on the ground reporter, who is too fearful of the Chinese authorities to be identified, says there is little activity on the streets with people shutting themselves indoors.

She said: “Only the main transport hubs, such as the airport and the train station indicate that this is a city of 11 million, as families jostle with their suitcases, eager to escape to their Lunar New Year destinations, the most important festival in the Chinese calendar, in case an all-out quarantine is enforced.

“There’s a notable difference as soon as I land in Wuhan. In the airport, almost every single person, including staff, is wearing a face mask.

“There’s hand sanitizer on every desk and some staff are wearing gloves. I walked through an infrared camera in arrivals but no one seemed to be paying any attention.

“Travelling into the city by cab, even drivers who are alone in their cars are wearing masks. With the fog, pollution and rain.”

A major Lunar New Year event, the most important event in the Chinese calendar which was due to start on Friday, has been cancelled.

Around 30,000 tourists had already purchased tickets to the event and 200,000 free event coupons had been handed out.

Mr Bin said: “Basically, do not go to Wuhan. And those in Wuhan please do not leave the city.

“Though the transmission route of the virus is yet to be fully understood, there is a possibility of virus mutation and a risk of further spread of the epidemic.”

The majority of cases have been found in Wuhan, where a seafood market which illegally sold wild animals is suspected of being the source of the outbreak.

Chinese officials confirmed ‘novel coronavirus‘ – which causes pneumonia -can be passed from person to person.

Leading expert, Dr Jeremy Farrar, director of the Wellcome Trust, said that marks a serious shift change in the outbreak.

He warned: “This is extremely concerning.”

“Person to person transmission has been confirmed and, as expected, we are seeing rapidly increasing case numbers across China, and in more countries, with health care workers infected.


14 tested for coronavirus with desperate hunt for 2,000 Chinese arrivals


Britain's 15 best fish and chip shops revealed – does YOUR local make the cut?

“With travel being a huge part of the fast approaching Chinese New Year, it is right that concern levels are at the highest level.”

The mayor of Wuhan has confirmed the latest deaths, an 89-year-old man from the city, which is home to more than 11 million people.

A 66-year-old man, known only as Li, and a woman, 48, known as Yin were also confirmed to have died from multiple organ failure.

Coronavirus is an airborne virus, spread in a similar way to colds and the flu.

It is incredibly contagious and is spread through contact with anything the virus is on as well as infected breath, coughs or sneezes.

In most cases, you won’t know whether you have a coronavirus or a different cold-causing virus, such as rhinovirus.

But if a coronavirus infection spreads to the lower respiratory tract (your windpipe and your lungs), it can cause pneumonia, especially in older people, people with heart disease or people with weakened immune systems.

There is no vaccine for coronavirus.

In 2003 an outbreak of a similar virus, SARS, infected more than 8,000 people in 37 countries before it was brought under control, killing 800 of those worldwide. 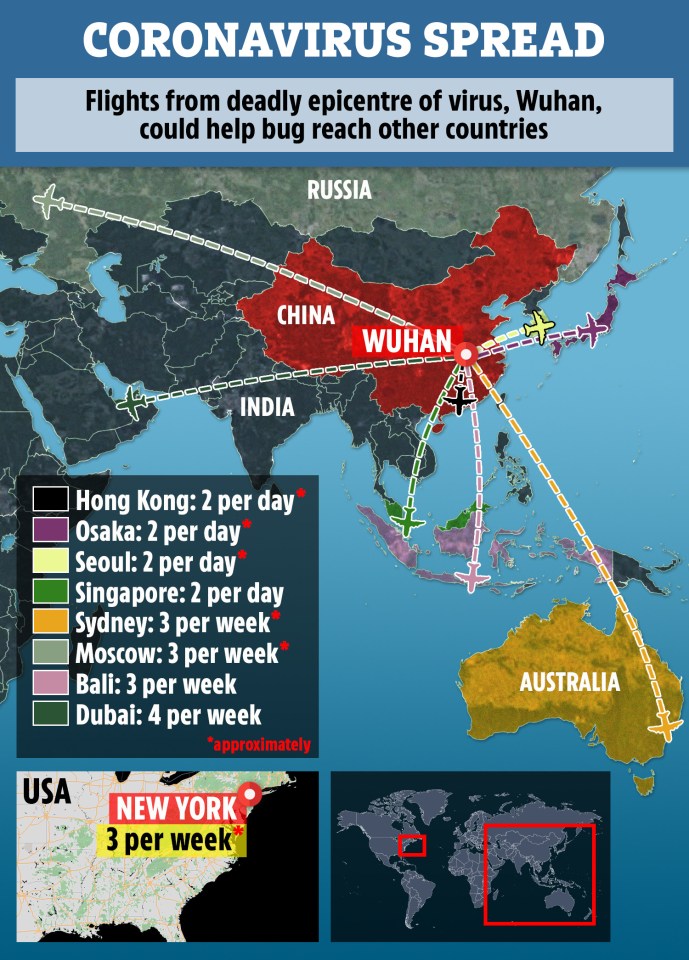 Kennedy Space Center is launching astronauts into space again – and your kids will...

Sun agony aunt Deidre Sanders reveals how to find that special person…and what to...

Fury as one of the 12 Israeli men accused of ‘gang rape’ of Brit...

MASKED Singer star Katherine Jenkins seems happy with her big reveal at the premiere of her debut movie role. All eyes were on the...

THE Government faces calls to end a witch-hunt on Army veterans after an ex-soldier being probed took his own life. Eddie “Spud” Murphy was...

Why Ayoze Perez wanted to join Leicester from Newcastle | Football...