By Georgia Simcox For Mailonline

She recently jetted to Dubai as she escaped Britain’s coronavirus restrictions.

And Chloe Ferry ensured she was making the most of her trip as she set all eyes were on her while flaunting her eye-popping curves during her getaway on Saturday.

The Geordie Shore star, 25, turned heads as she posed in a tie-dye two-piece. 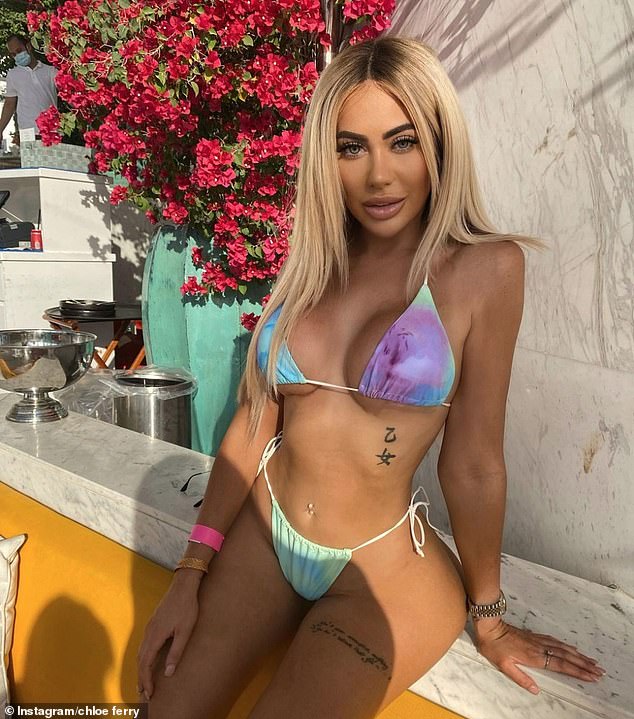 Wow! Chloe Ferry ensured all eyes were on her as she flaunted her eye-popping curves during her festive getaway on Saturday

Chloe wore a triangle-shaped bikini top as she showed off her assets, pairing it with skimpy green bottoms.

The TV personality opted for glamorous make-up as she wore her hair in a straight style and hanging loose around her shoulders.

She accessorised simply with a gold and silver watch and a ring on her index finger.

Taking to her Instagram Stories, Chloe displayed her toned physique as she posed in front of the mirror in a blue bikini. 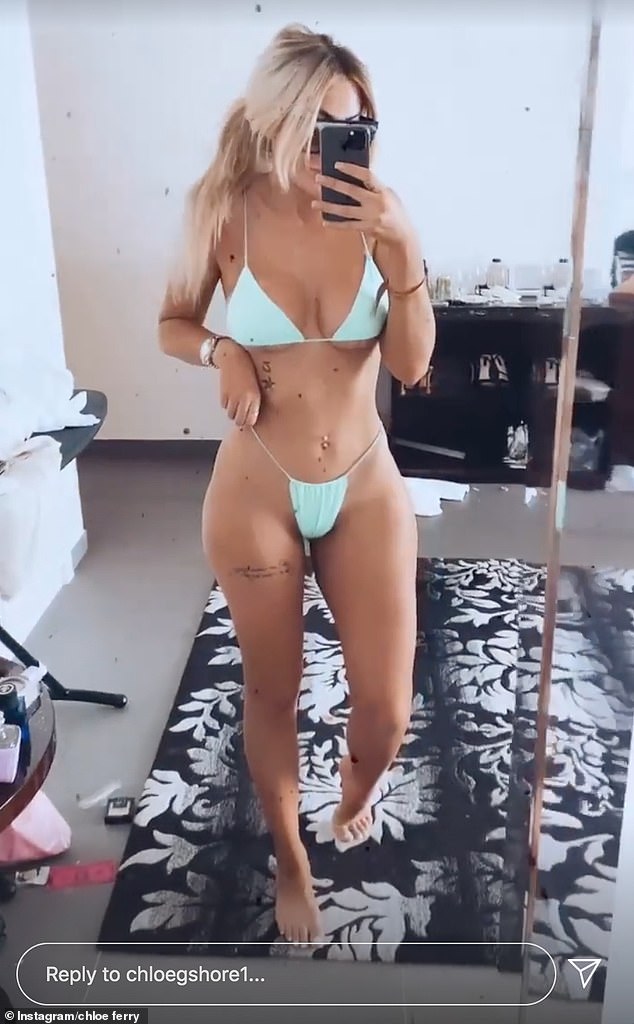 Stunning: Taking to her Instagram Stories, Chloe displayed her toned physique as she posed in front of the mirror in a blue bikini

She revealed that she has lost more weight since being in the UAE as she has ‘been living on salads’.

Chloe recently told how she has lost weight since being in the UAE, after ‘putting on eight pounds’ while filming Celebs Go Dating.

She said: ‘Since being here I’ve actually lost weight. Obviously from filming I’ve put like eight pounds on but I’ve been eating really healthy but I have obviously been drinking.’ 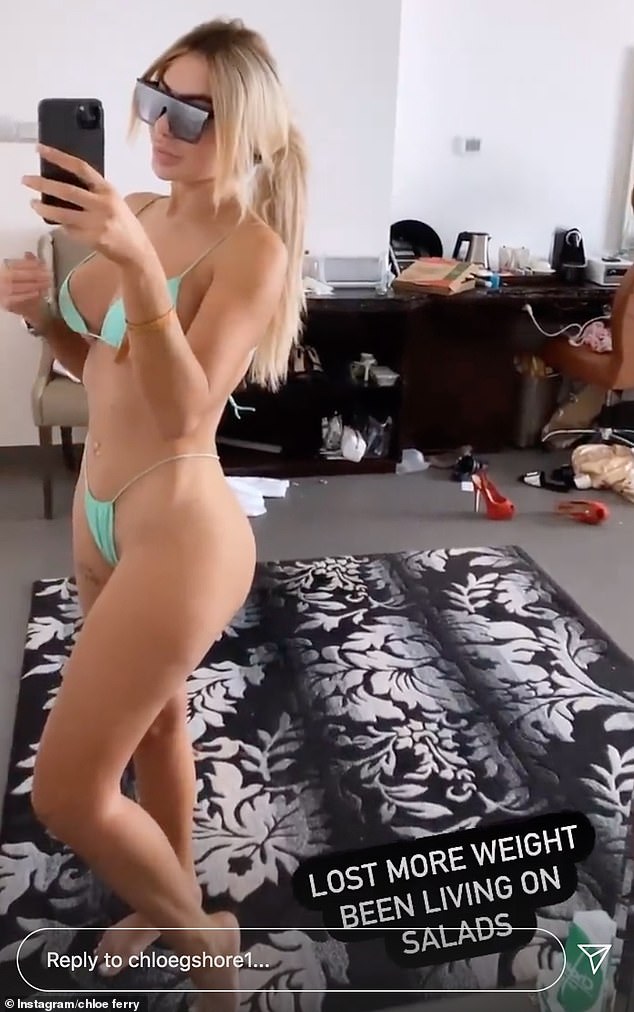 Food: She revealed that she has lost more weight since being in the UAE as she has ‘been living on salads’

Chloe has joined a long line of reality stars and influencers who have travelled to Dubai this month, amid strict coronavirus restrictions back home in the UK.

The reality star ensured all eyes were on her once again as she posed up a storm poolside while soaking up the sun on Thursday.

She sizzled in a bright blue bikini as she worked her magic in front of the lens.

Chloe, who underwent breast reduction surgery in October to balance out her slimmer frame following a two-stone weight loss in lockdown, flaunted the results of the surgery. 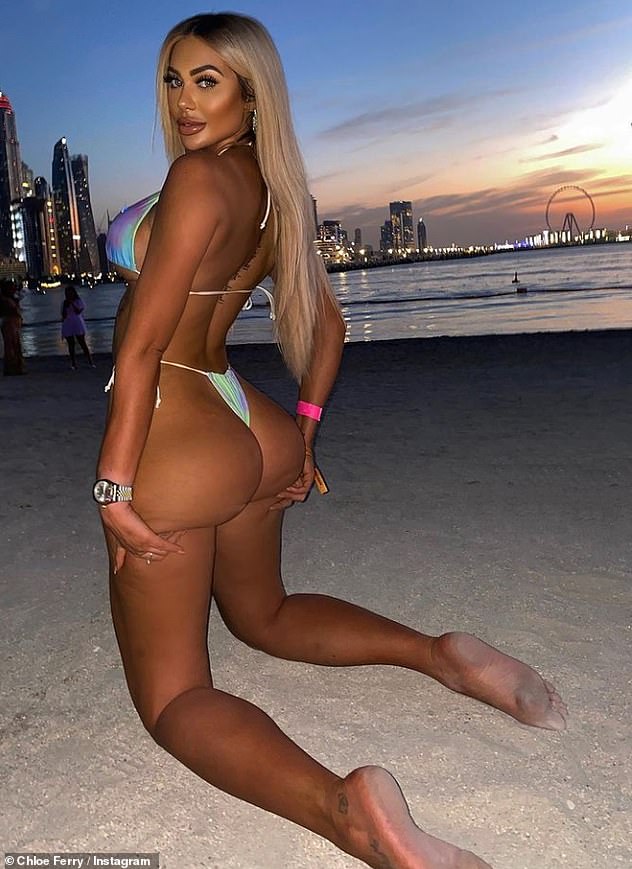 Sizzling: The reality star set pulses racing as she showcased her stunning curves in a series of bikini snaps while enjoying her time in the United Arab Emirates

However, she was accused of a ‘Photoshop fail’ in a racy Instagram post on Sunday, as she sported a scanty sheer bodice and a satin thong.

The star looked incredible in the snap which showcased her taut midriff and ample cleavage.

One eagle-eyed fan wrote: ‘That tile line is looking a bit wavy…. you should just go easy on the editing….you’ll look good regardless.’

Another warned: ‘Be carefull with the photoshop. Such a shobizz person u should know doing it better.’ [sic] 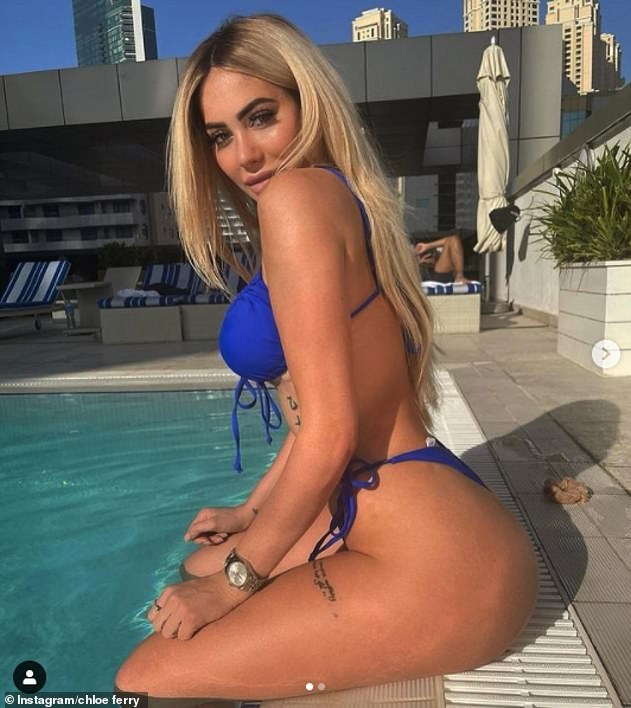 Blue-tiful: Chloe recently told how she has lost weight since being in the UAE, after putting on weight while filming Celebs Go Dating

A second snap posted on Sunday saw the star show off her famously peachy posterior as she turned her back to the camera.

This isn’t the first time Chloe has been accused of altering her photos.

Observant followers also accused her of Photoshopping her racy snaps earlier this month, as they noticed the split staircase behind her had warped around her curves.

Chloe captioned the image at the lavish Celebs Go Dating mansion: ‘I have a wild side to[o],’ and one follower responded: ‘U dont need to edit your body!!! Its beautifull just the way it is.’ [sic]

Another penned: ‘Chloe, the stairs babe!! You’re freaking gorgeous you don’t need to photo shop the booty like that love!’ while a third social media user criticised the star: ‘Lol how embarrassing.’ 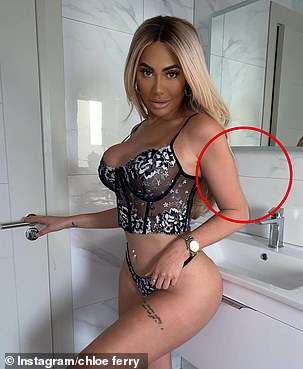 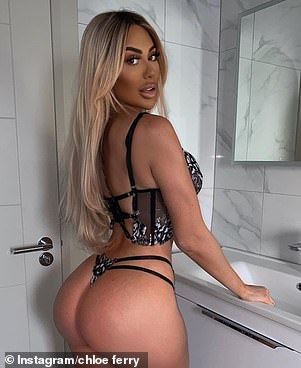 Oh dear: Chloe was accused of a Photoshop fail once again after fans noticed a suspicious tile line in a racy social media post on Sunday