Charlotte McKinney looked stylish in a beige maxi skirt on Thursday as she stepped out in Los Angeles amid its ongoing heatwave.

The 27-year-old Fantasy Island star helped cool down the heat with an iced tea while she took care of errands around the city.

The actress showcased her toned legs in her Boohoo Jersey skirt and paired it with a white Boohoo Rib Racer Front tank top. 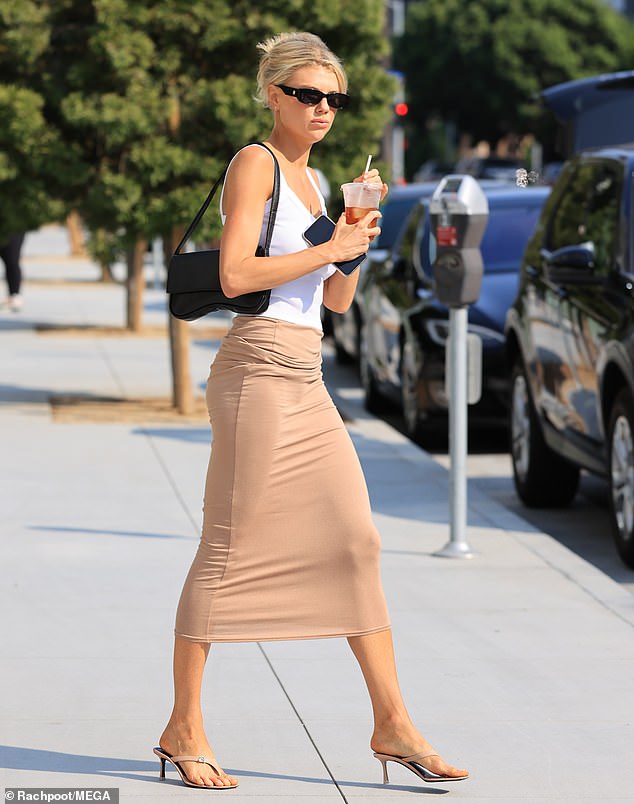 Charlotte stood tall on a set of beige open-toe heels that matched her skirt.

She accessorized with a black kidney-shaped Boohoo handbag slung over one shoulder, and she blocked out the sun with a trendy set of slim black sunglasses.

The 5ft7in Instagram star had her blonde locks tied back in a bun, and she carried a black cloth mask with her to help slow the spread of the novel coronavirus once she couldn’t social distance anymore. 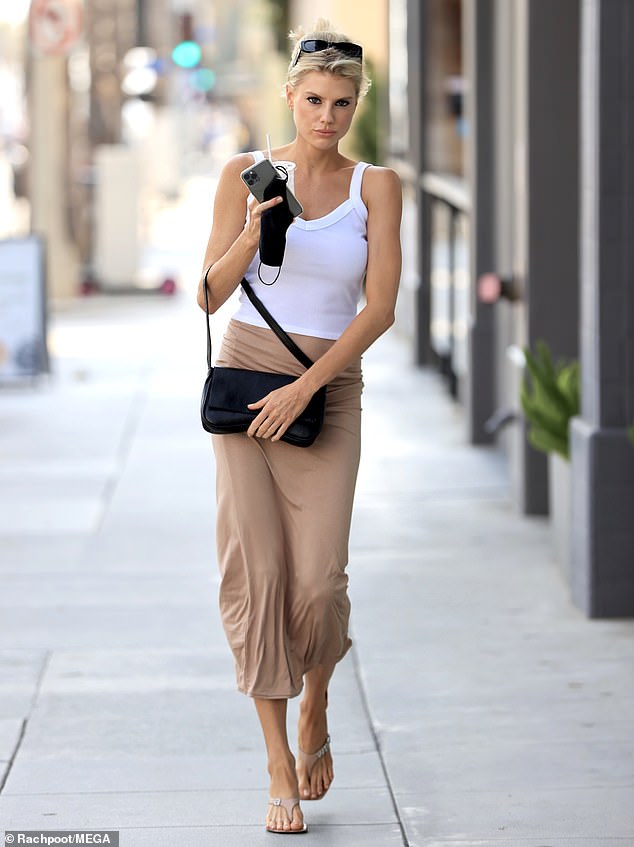 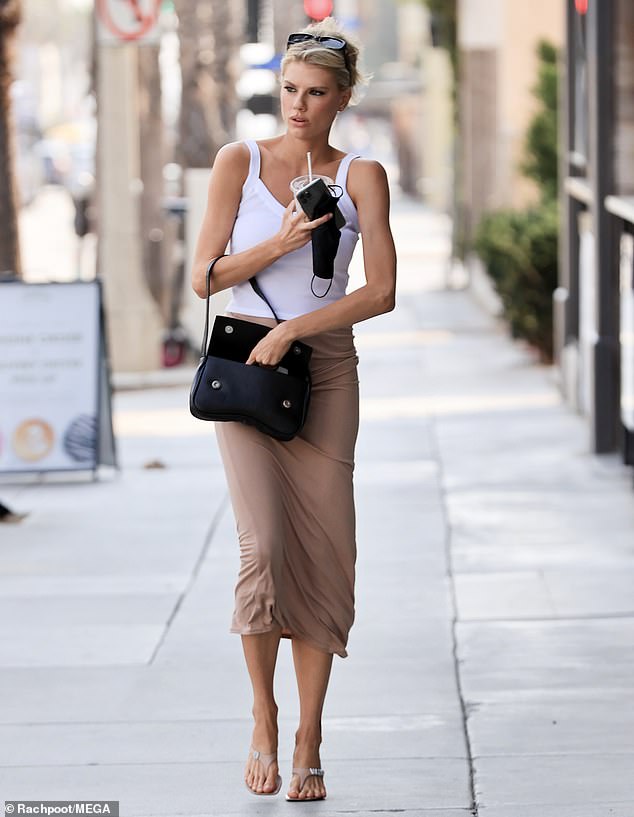 Cooling down: The Fantasy Island star sipped on an iced tea amid LA’s ongoing heat wave

Earlier this month, Charlotte shared some intimate behind-the-scenes photos on Instagram from her 27th birthday on August 6.

The social media star, who rose to fame after starring in a Carl’s Jr. ad aired during the 2014 Super Bowl, showed an expression of shocked delight as her thick vegan chocolate cake arrived while she dined at the swanky Japanese restaurant Nobu Malibu.

‘Best cake I’ve ever had!! Couldn’t believe there was no dairy,’ she captioned a closeup of the cake posted to her Insta Stories.

She also included some photos from her relaxing trip to the beach earlier in the day with her sister Garland Yi, culminating with a birthday lunch featuring another tasty cake.

‘Feeling extremely grateful for all the birthday love and cake,’ she captioned the snaps. 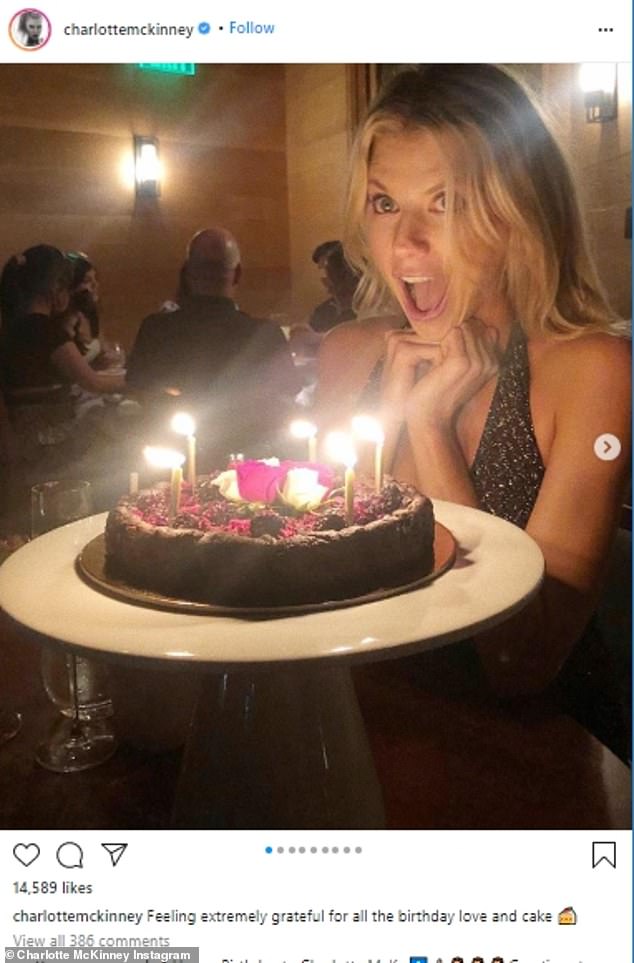 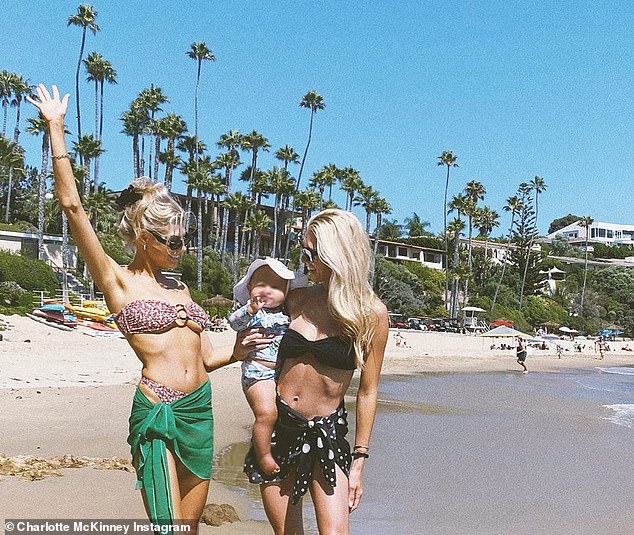 Beach getaway: She showcased her trim frame in a red dotted bikini and a green sarong while enjoying time at the beach earlier in the day with her sister Garland Yi 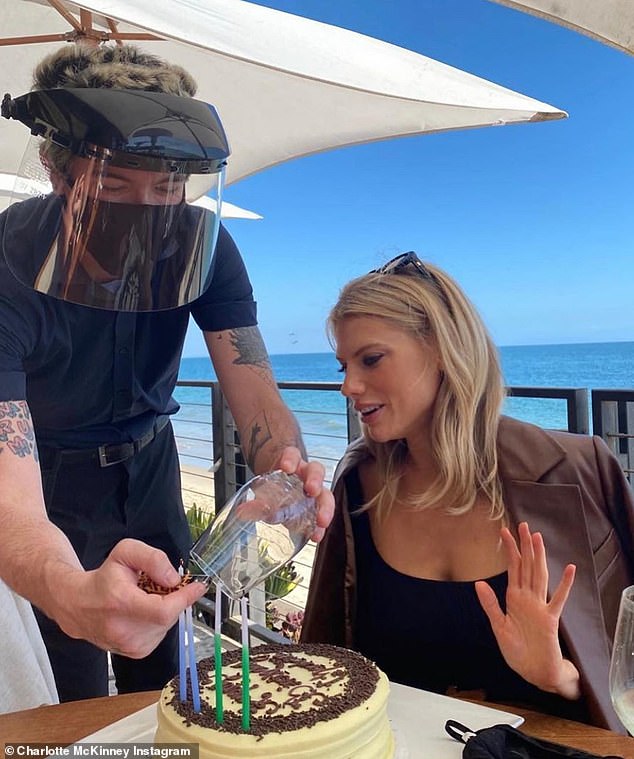 Yum! The afternoon’s celebrations culminated in the first cake of the day

In recent years, Charlotte has been transitioning from her career as an Instagram influencer to an actress.

She was featured in the 2017 Baywatch remake with Dwayne Johnson and Zac Efron, as well as the Flatliners remake from the same year, and earlier in 2020 she appeared in Fantasy Island, a horror reboot of the 1970s and ’80s TV series.

Her next film, the Pauly Shore vehicle Guest House, is expected to arrive on September 4. 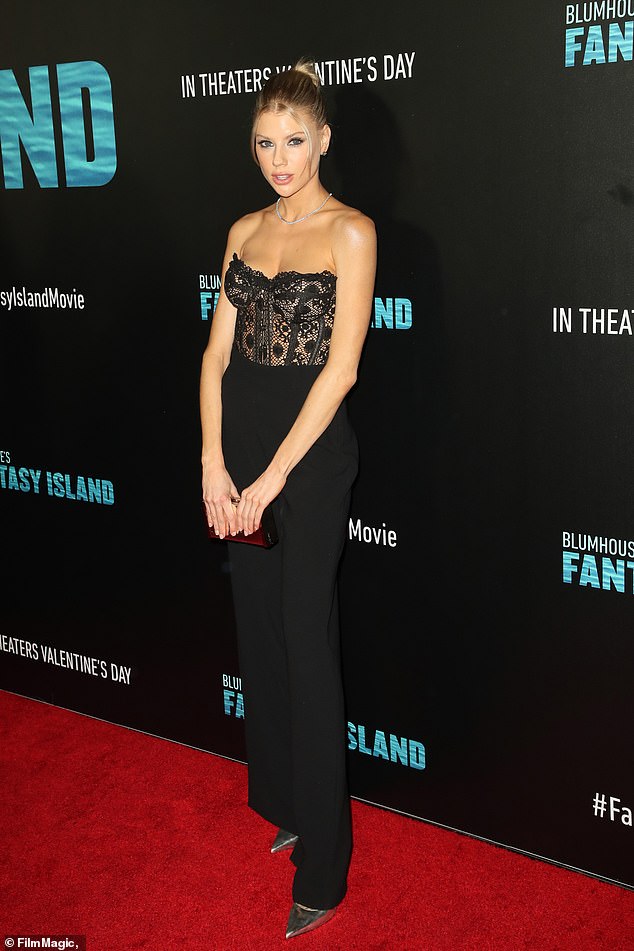 New venture: In recent years Charlotte has been transitioning from her Instagram modeling to acting. She appeared in the horror film Fantasy Island earlier this year; pictured in February

Late last month, Charlotte opened up with Gotham about how Instagram stardom has changed since her days as one of the first people to get famous on the platform.

‘I grew up right when Instagram started, and I just used it to post modeling pictures. And now everyone wants to see everything,’ she explained.

‘They don’t care just about pretty pictures — they want to see everything. What I’m eating, what I’m doing, me looking perfect and also me not looking perfect. I am trying to adjust because now it’s not just about a pretty Instagram picture.

‘I’m trying to grow with how the internet is growing, which is kind of scary, and I definitely have trouble with it.’

NASA finds parts of another asteroid on asteroid Bennu 0

Watch: How To Make Oats Uttapam For A Healthy And Wholesome Breakfast 0