Brody Jenner was first linked to Louis Tomlinson’s ex Briana Jungwirth back in May.

And the rumored couple was spotted back together again after The Hills star was spotted with two other women recently.

Brody, 36, joined the personal stylist, 28, for sushi in Malibu as they both kept their style casual on Friday. 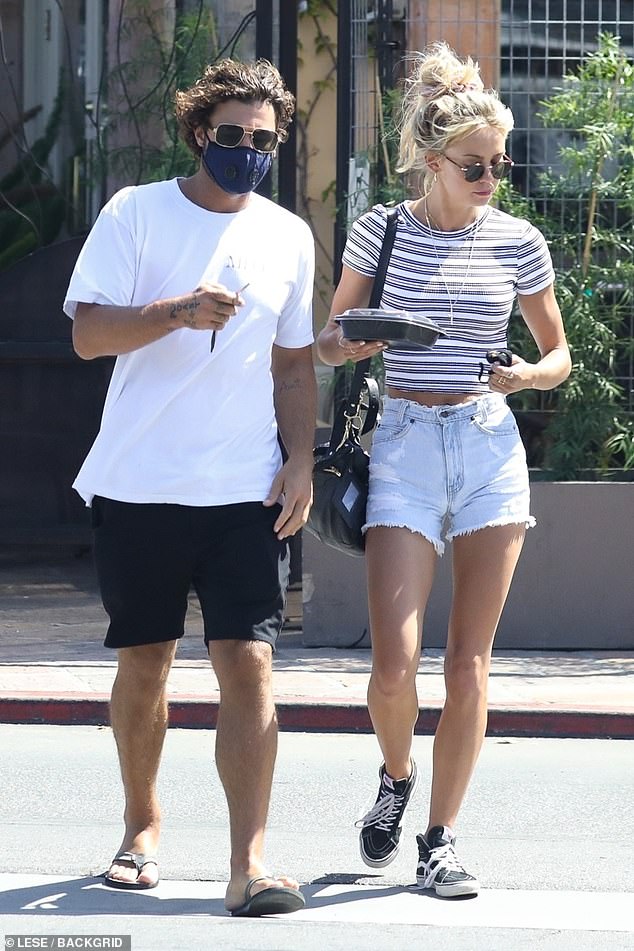 Malibu mood: Brody Jenner joined his rumored girlfriend Briana Jungwirth for sushi in Malibu on Friday, as they both kept their style casual

Most of his famous face was covered in a blue reusable face mask, amid the coronavirus pandemic, and metal frame sunglasses. 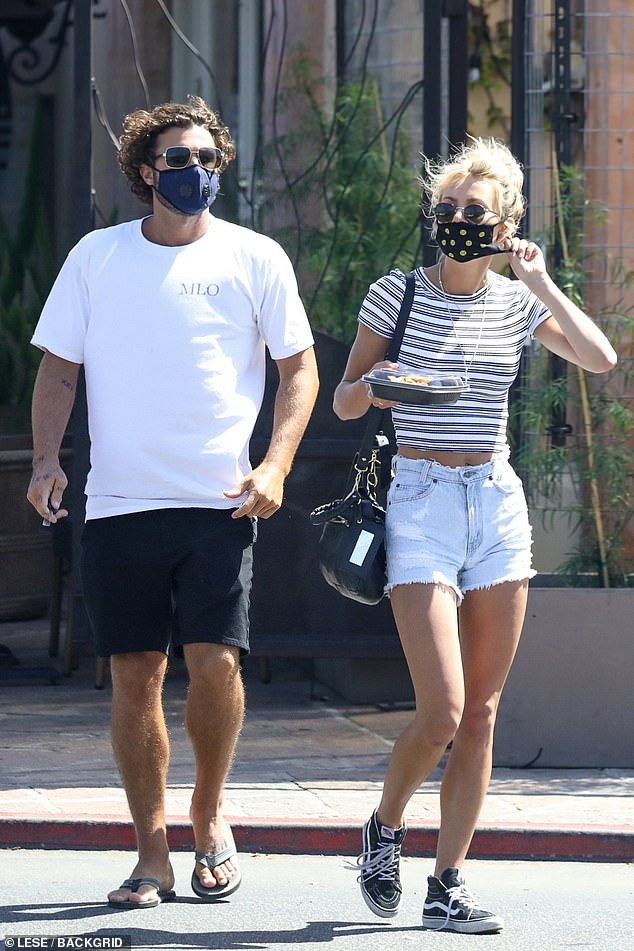 The mother-of-one accessorized her look with a long black crossbody bag on her shoulder and dark brown shades.

In June, it was reported Brody introduced Briana to his estranged wife Kaitlynn Carter after a month of dating – and the pair have hit it off.

Brody was keen to seek his former flame’s approval and the two women got on like a house on fire, TMZ reports, with Kaitlynn feeling the The Hills star has found a ‘good match’ in Briana.

‘Brody and Kaitlynn are still very close, they are co-parenting dogs after all, and BJ really wanted Kaitlynn’s approval on his new GF, which he got,’ the website states. 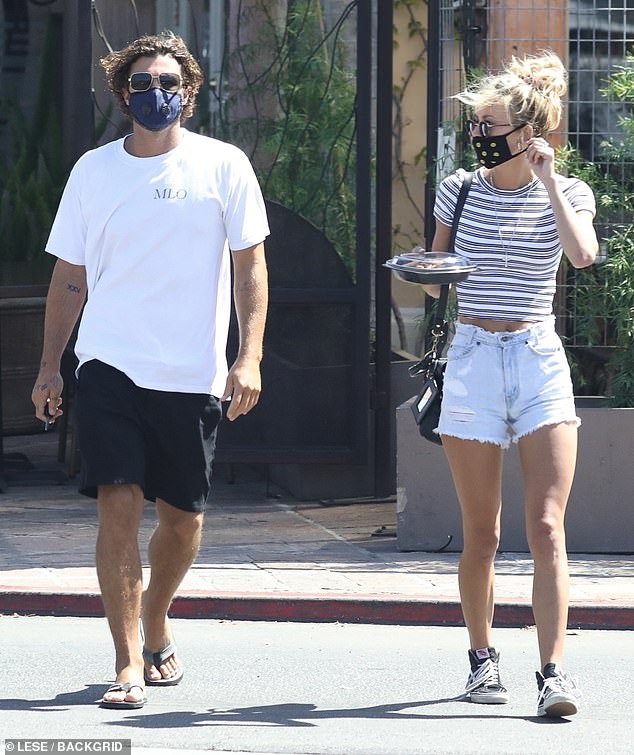 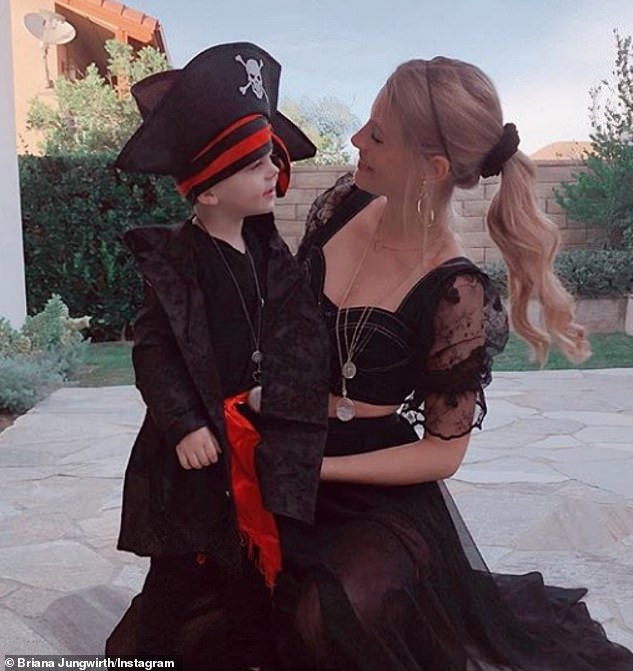 ‘Briana seemed cool with meeting a slice of Brody’s past, and she totally understood the dog situation and the fact Brody and Kaitlynn will remain in the same circles.’

Briana and Kaitlynn are said to have ‘got along’ and even discussed the former’s young son Freddie, who Brody is believed to have met.

A source told TMZ that Kaitlynn feels her former husband has found a ‘good match’, adding: ‘Kaitlynn felt Briana was very kind and with Brody for all the right reasons.’

‘Brody wanted to introduce Briana to Kaitlynn so she’d be comfortable with a situation that is anything but standard for exes,’ TMZ’s source added. 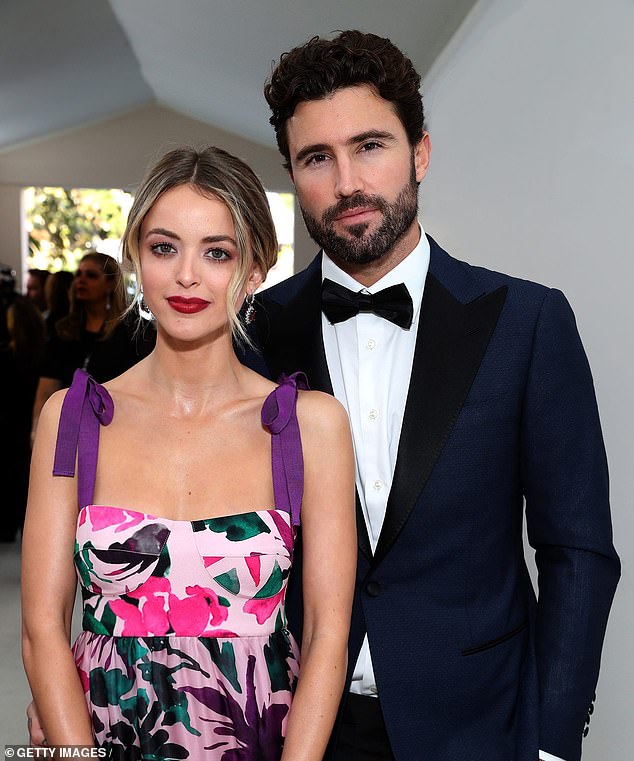 Former flames: In June, it was reported Brody introduced Briana to his estranged wife Kaitlynn Carter after a month of dating – and the pair have hit it off (pictured together in 2019)

Brody and Kaitlynn married in an intimate ceremony in Bali in 2018, but parted ways in 2019 after five years together.

The couple’s split was confirmed when Kaitlynn was pictured in an intimate clinch with singer Miley Cyrus, 27, while on holiday in Lake Como, Italy, last August.

The former couple are soon set to reunite on The Hills: New Beginnings, when production resumes later this summer.

Brody and Kaitlynn have been spending some time together during quarantine to co-parent their dogs.

I'm A Celebrity… Get Me Out Of Here! Australia tipped to film in November and December 0

Buccaneers' Donovan Smith raises concerns about playing 2020 season: 'I’m not a lab rat or a guinea pig to test theories on' 0