Britney Spears reveals she's turned to healing crystals to pray for 'guidance' in mystical new post... after her conservatorship is ex

Britney Spears has revealed her love of crystals, that are a huge trend in the world of mindfulness, and how she has turned to collecting them throughout the pandemic to get through troubled times.

On Monday, the 38-year-old pop star shared the cover of The Crystal Bible by Judy Hall, a guidebook that looks into the ‘spiritual, mental, emotional and psychological’ effects of crystals, as well as how you can use them to heal.

Britney – whose infamous conservatorship was just extended until February 2021 – explained that she recently used to them pray to find ‘more guidance and grace’ as well as using them in her past when she felt nervous before doing interviews. 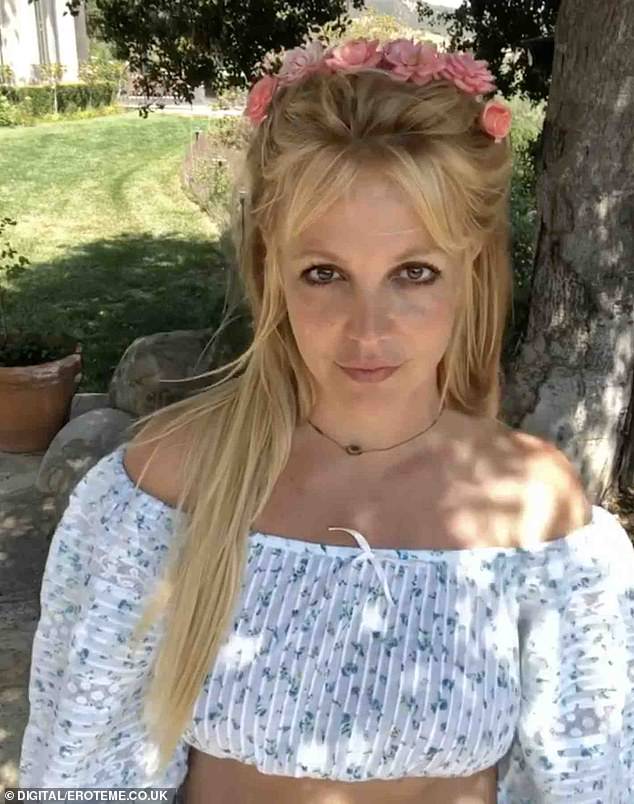 Healing: Britney Spears reveals she’s turned to collecting healing crystals during the pandemic and amid her conservator battle, in a lengthy Instagram post on Monday

‘Call me weird if you want but I really love crystals and rocks !!!!’ she began her post, adding: ‘During this pandemic I’ve had more time to myself so I started a collection of crystals and I now have 33.’

She then detailed how she uses them to pray and meditate every day, writing: ‘For instance, yesterday I prayed to find more confidence and grace ….. asking my spiritual guides to guide me … I usually also burn incense to clear the energy !!!’

Britney continued: ‘I even used to hold a small rock in my pocket when I was nervous for interviews for good luck.’ 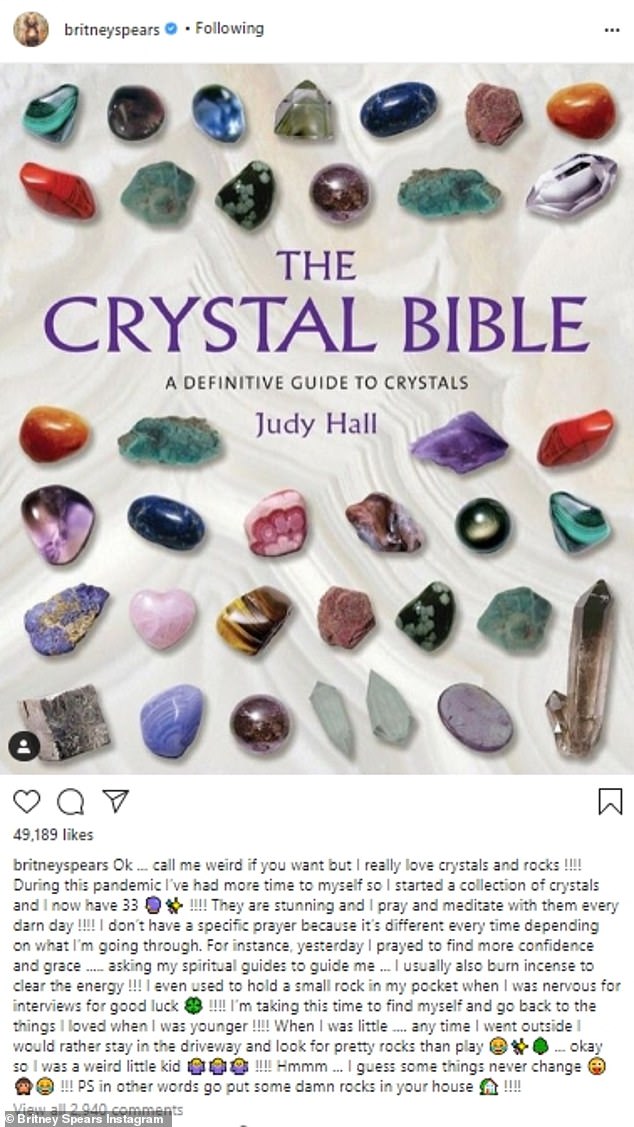 Crystal healing is often considered to be a pseudo-scientific alternative to medicine, with believers claiming they have healing powers, although naysayers counter that there is no science to support this claim.

However, crystal healing has been used throughout history by a variety of cultures, and has been around since the Middle Ages in Europe.

Britney recently received support from the American Civil Liberties Union, as she continues to be held under her conservatorship, which she has previously described as being ‘too controlling.’

‘People with disabilities have a right to lead self-directed lives and retain their civil rights,’ the ACLU tweeted last week. ‘If Britney Spears wants to regain her civil liberties and get out of her conservatorship, we are here to help her.’

The pop star filed paper in Los Angeles Superior Court last Tuesday asking the court to end her father Jamie Spears’s conservatorship which essentially gives him control of her finances and career decisions. 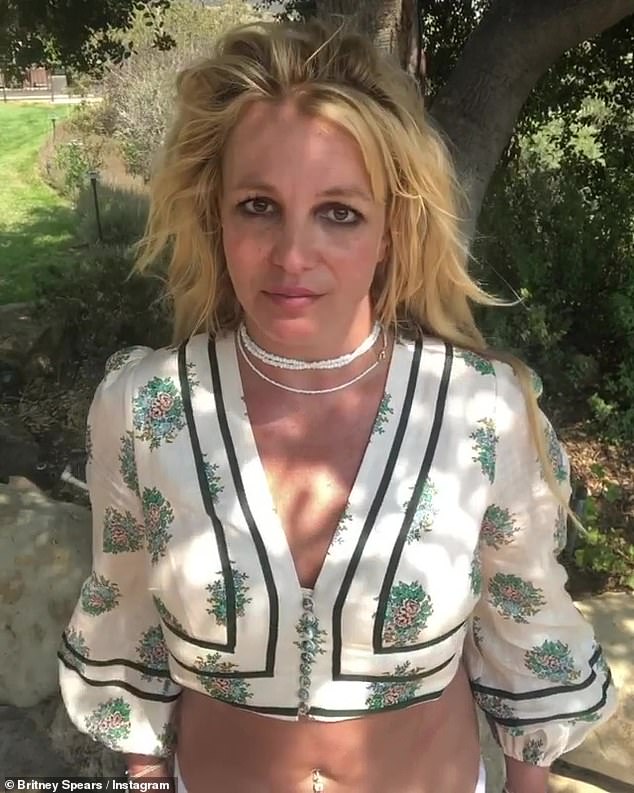 Fans: Britney recently answered questions by fans, though many flooded the comments section with more pertinent queries such as the #FreeBritney movement

The 68-year-old has been his daughter’s legal guardian since her very public meltdown 12 years ago – an arrangement the superstar’s loyal fans have blasted claiming she is being manipulated and controlled.

Due to health reasons, Jamie was forced to temporarily hand over the reins last year to Jodi Montgomery, who was already working as Britney’s care manager meaning she assesses the star’s needs and works with healthcare professionals to help her get the right treatment.

Britney is now fighting to keep Montgomery as her conservator, the court records show.

#FreeBritney protesters descended on the court Wednesday in support of the star after worried fans have been sharing conspiracy theories online in recent months claiming Britney is being held against her will. 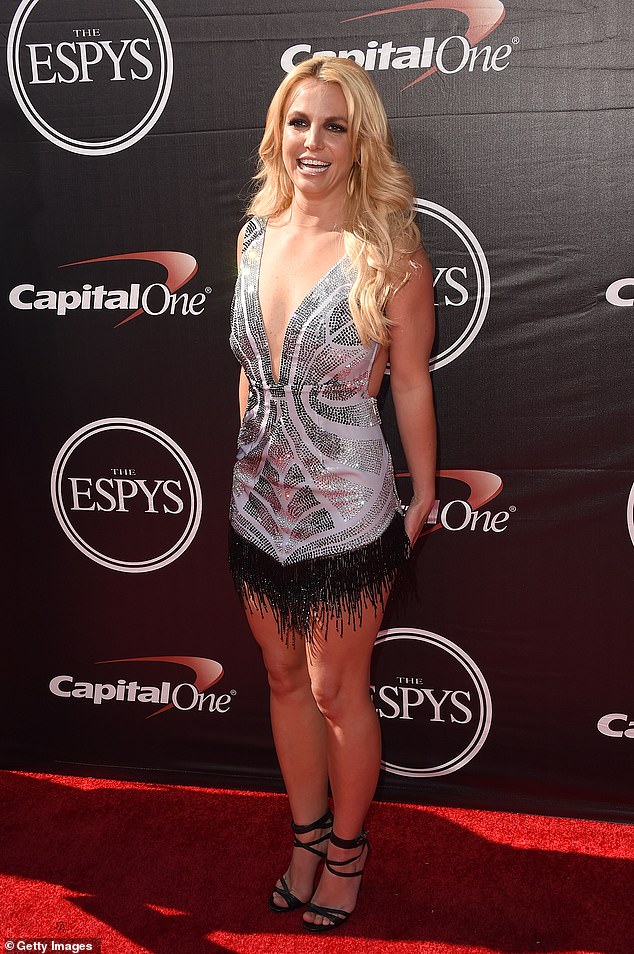 Pop star: Britney pictured at the 2015 ESPYS in Los Angeles 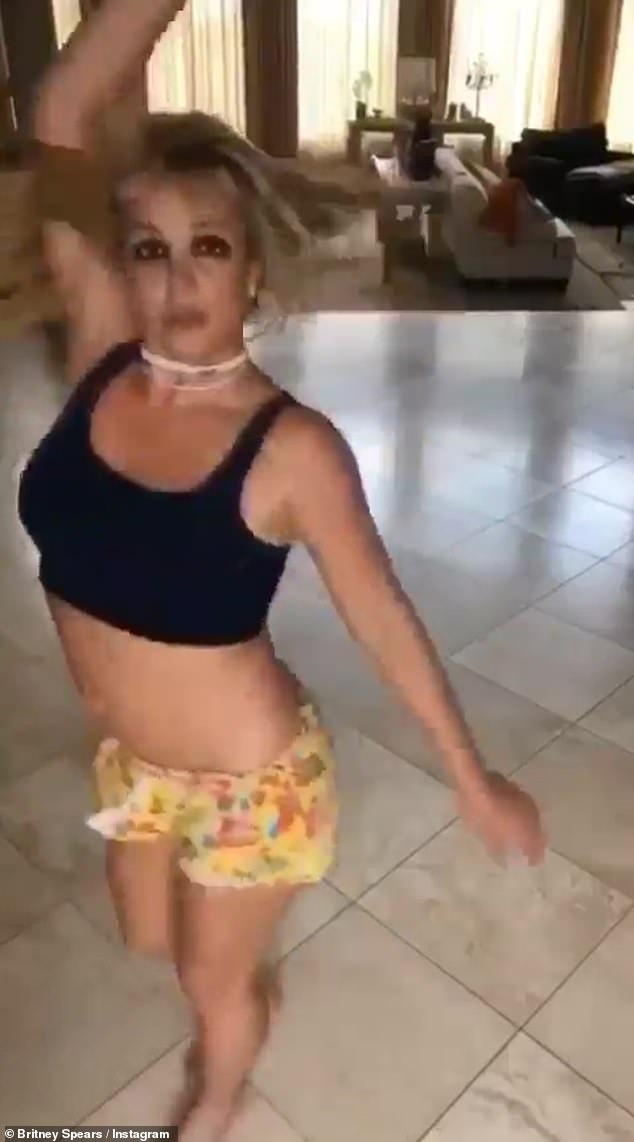 Dancing sensation: Spears shared a clip of herself dancing around in a black sports bra and yellow shorts on Monday 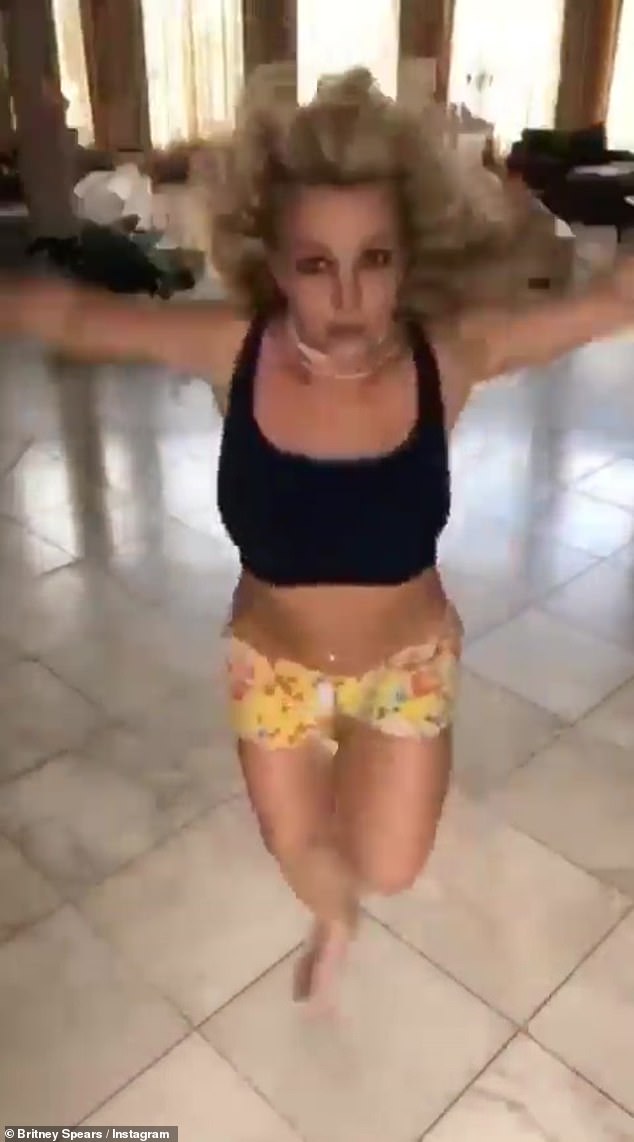 Working it: Spears performed an impressive routine for followers

Many thought airfares would spike in the age of coronavirus. That's not happening yet 0

What is Caturday? Britain's cat lovers rush to social media to share pics of their felines 0

Best supplements for men: The herbal extract that boosts fertility and heart health 0