Ben Affleck shows off muscle in slim-fitting T-shirt... as he and girlfriend Ana de Armas go for a stroll with his son Samuel in LABy

They have been nearly inseparable since going public with their relationship earlier this year.

And Ben Affleck and Ana de Armas showed they are closer than ever as they enjoyed a stroll in her Venice beach neighborhood in Los Angeles on Wednesday.

Continuing to prove that she’s been a big hit with his family, the couple were joined by his son Samuel, eight, for their casual outing. 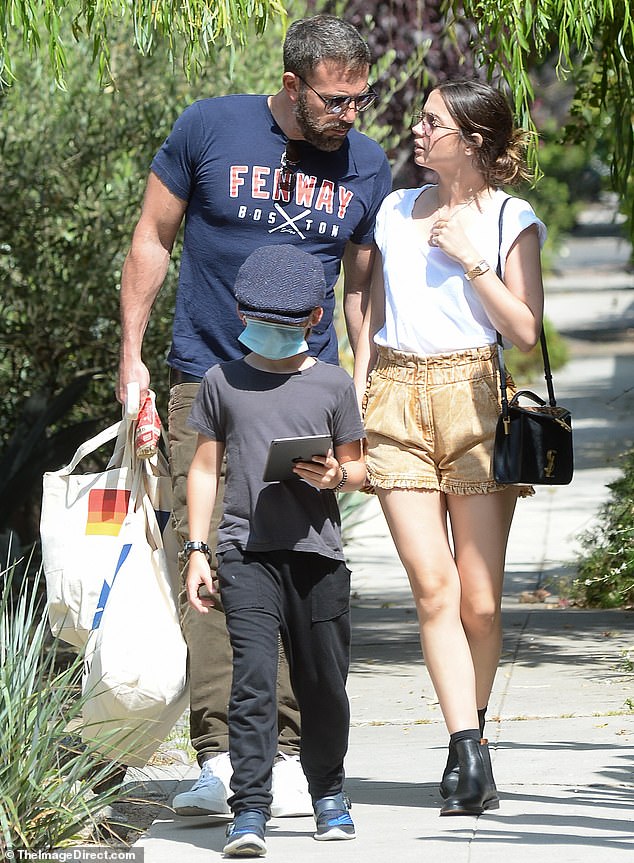 Close: Ben Affleck and Ana de Armas showed they are closer than ever as they enjoyed a stroll in her Venice beach neighborhood

Ben, 47, looked as though he’s been hitting the gym lately, as he showed off a hint of a ripped physique underneath a slim-fitting T-shirt.

The navy blue tee represented the home of his favorite baseball team, Fenway Park in Boston. 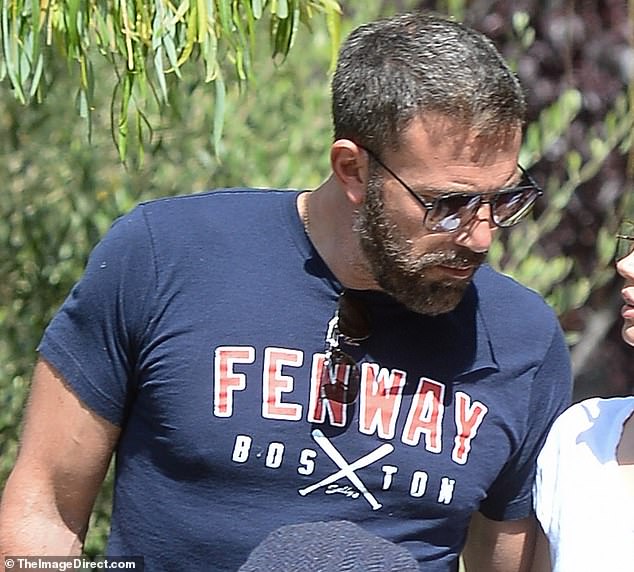 Tight-fit: The actor appears to be getting into good shape again as she showed off his muscles in a slim-fitting T-shirt 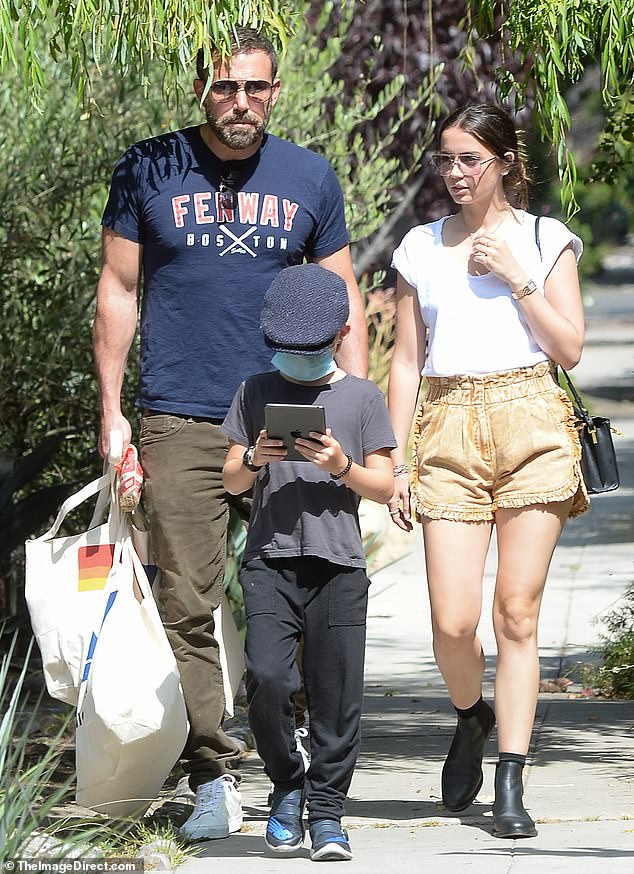 Together: Ben and Ana were joined by his son Samuel for the Wednesday outing

She teamed it with a black YSL crossbody bag, black booties and rose colored sunglasses in a metal frame.

Keeping cool she left her short brunette hair tied up in a messy bun with pieces framing her face.

Ben and Ana both opted to go without face masks, despite the coverings being required in California when in public amid the coronavirus pandemic.

Samuel, however, who was occupied on an iPad as he walked in front of his dad and Ana, did wear a blue medical face covering.

Their outing came after they spent last week together with Ben’s mother and his kids, Violet, 14, Seraphina, 11, and Samuel, in Georgia.

‘Everyone gets along great,’ a source told People earlier in the week. 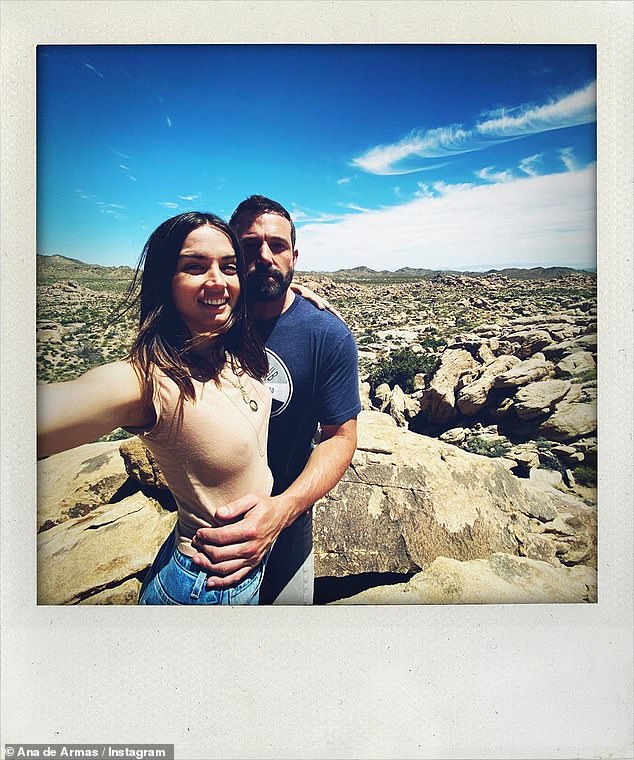 Positive force: Pals of the Ben say Ana has been a great influence on the actor

‘They are spending a few days in Georgia with Ben’s kids. It’s a low-key vacation.’

Pals of the Ben say Ana has been a great influence on the actor.

The Knives Out actress has had a positive impact on his life and the couple have loved their time together and getting to spend quality time with Ben’s kids ‘safely’ during the coronavirus pandemic.

Ben’s pal told PEOPLE: ‘They are enjoying their time together. He makes her laugh and she’s a great influence.

‘They safely visit with his family and he works to make sure he is healthy and present for his family. 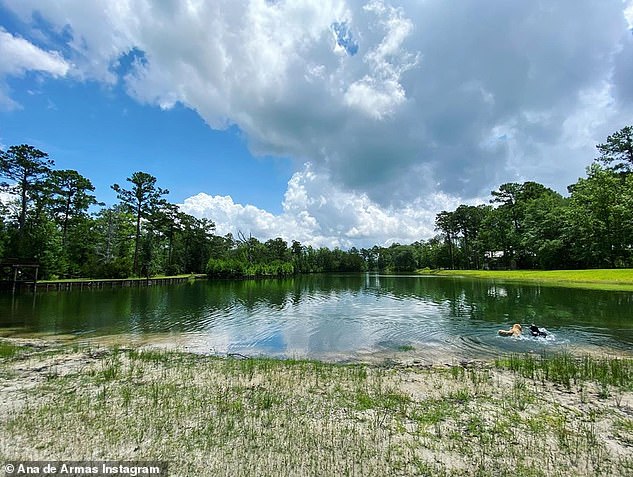 ‘His priority will always be his children and making that work.’

Earlier this month, a source claimed that Ana has been wowed by Ben and ex-wife Jennifer Garner’s co-parenting skills.

The actress – who met Ben on the set of the thriller film Deep Water in 2019 – is impressed by how the celebrity duo have managed to balance their acting careers with raising their three children.

The insider explained: ‘[Ana] thinks Ben is such a sweet and nice guy. [She] admires how he juggles so much between work, his kids and co-parenting with Jen.’

Ben and Jennifer divorced in 2018, after more than a decade of marriage – but he’s subsequently tried to ensure he makes enough time for his kids and his new girlfriend. However, the Hollywood actor ‘always makes sure he has time for [Ana] and that she is number one’.

OnePlus Nord price revealed: here's how to be one of the first to buy one TODAY 0