The Bachelor: New trailer hints Bella Varelis will be eliminated
Lucy Hale and Colton Underwood hike together as it's revealed she 'dating' The Bachelor star
Bachelor In Paradise 'queen' Keira Maguire lashes out at an Instagram meme account

A former Bachelor star awaiting emergency surgery to reverse her breast enlargement after discovering the left implant had extensively ruptured.

Sarah-Mae Amey, who appeared on Tim Robards’ season in 2013, shared her ordeal on Instagram on Wednesday, telling fans she regretted getting the implants in Thailand a decade ago.

‘I’ve been at the doctor’s today after I was sent to get an ultrasound around my boobs… [I’ve had] pain in my left boob for quite a while,’ Sarah told fans while sitting in the car. 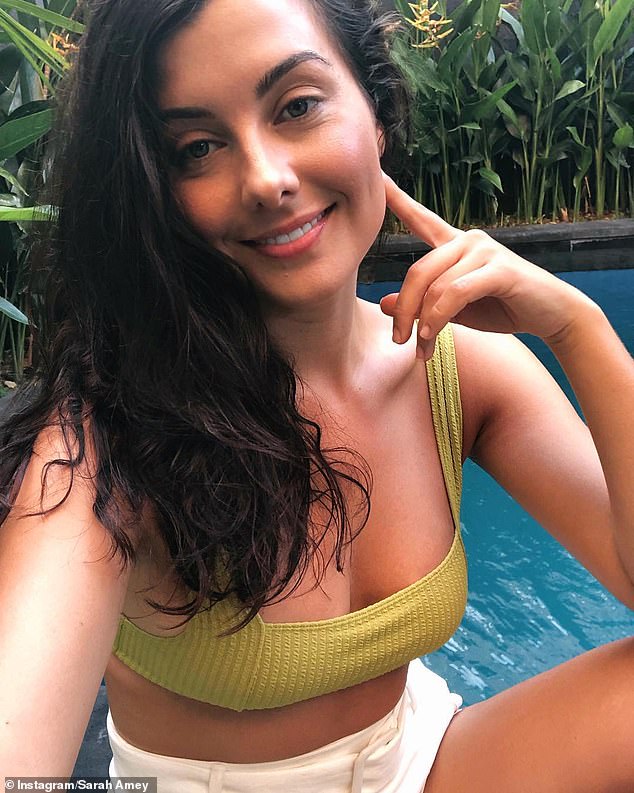 ‘I had stabbing pains’: The Bachelor’s  Sarah-Mae Amey (pictured) is desperately awaiting emergency surgery to remove her left breast implants after discovering that it had extensively ruptured

‘My left breast has quite an extensive, massive rupture. The doctors have confirmed with the ultrasound that it’s so extensive that it’s probably been there for quite a while and therefore connecting to all of the breast tissue,’ she lamented.

‘So it’s all going to have to be removed. Basically, as soon as possible,’ she added.

The Gold Coast florist went on to admit she’s struggling to accept the fact that, if she decides to get her implants removed without replacing them with new ones, there will be extensive scar tissue causing dents in her breasts. 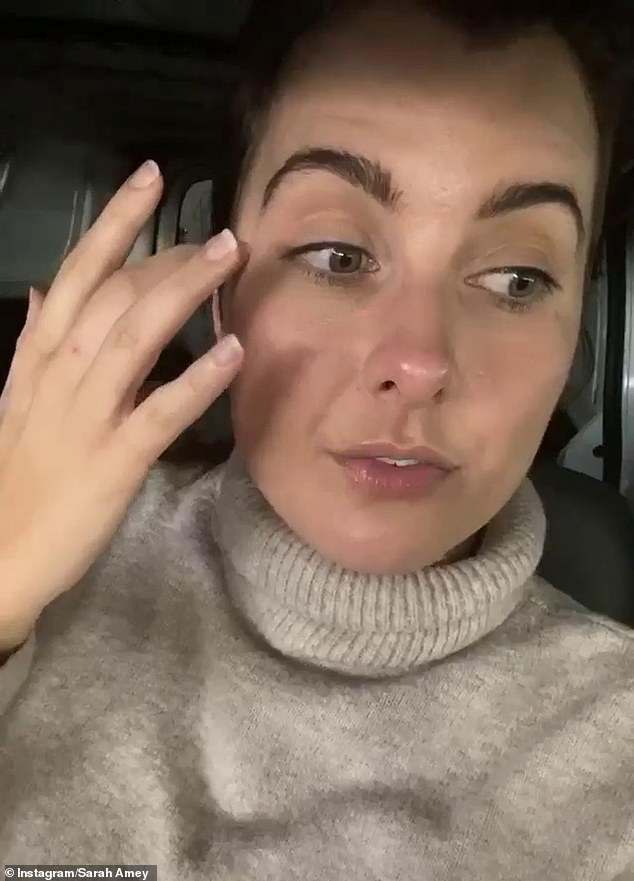 ‘It’s all going to have to be removed’: The brunette (pictured) shared her ordeal via Instagram Stories on Wednesday, telling fans that she regrets getting the implants in Thailand a decade ago

What happens when breast implants rupture?

All types of breast implants have the potential to tear. This is known as a rupture.

When a saline implant ruptures (or it’s valve fails) the saline quickly leaks out and is absorbed by the body, leaving the breast looking deflated in a matter of days.

It is less obvious to identify when a silicone implant ruptures, as the gel takes much longer to ooze out of the rupture than saline.

The silicone is not absorbed, and can therefore spread to other parts of the body.

The body may react to the silicone implant rupture by forming scar tissue, sometimes causing a distortion of the breast’s shape.

Encouraging her fans to get their breast implants checked regularly, Sarah-Mae explained: ‘I was experiencing stabbing pains in my left boob quite a while ago and I just left it.’

As a result, Sarah-Mae said her rupture has become ‘quite dangerous’.

‘Don’t get your boobs done in Thailand, basically. I thought it was a great idea as a young and naive 19-year-old,’ she implored, explaining that these days she doesn’t care about her breast size. 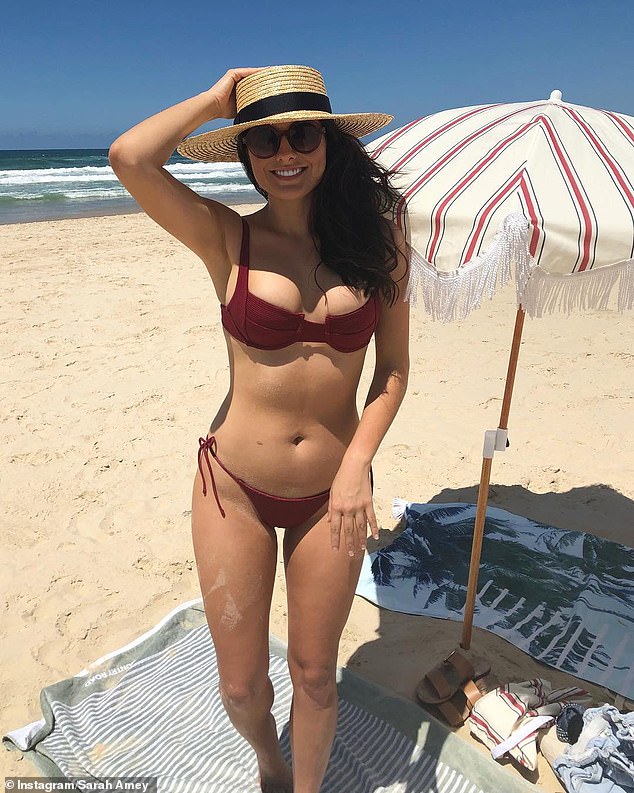 Painful: Encouraging her fans to get their breast implants checked regularly, Sarah-Mae (pictured) explained: ‘I was experiencing stabbing pains in my left boob quite a while ago and I just left it’ 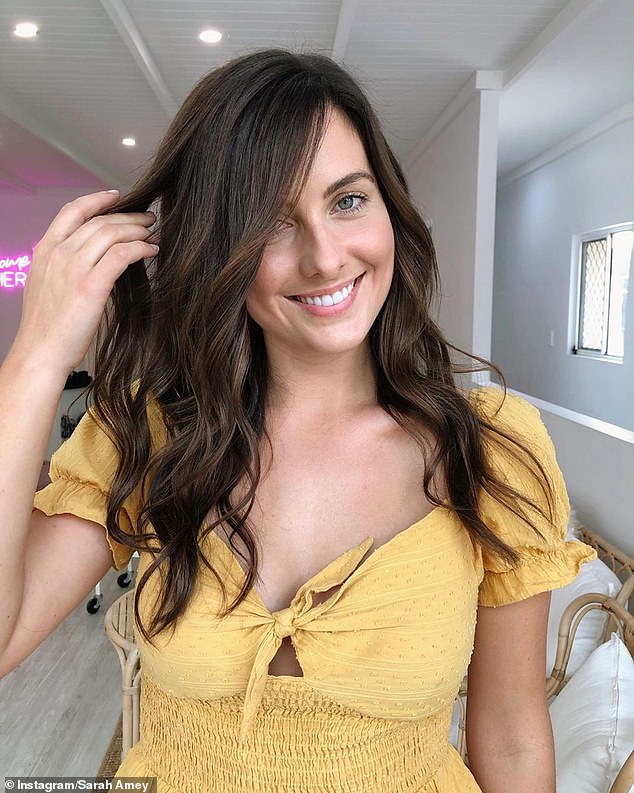 ‘Don’t get your boobs done in Thailand, basically’: Sarah-Mae (pictured) said her rupture has become ‘quite dangerous’

Breast implant illness is a term used by women who self-identify symptoms they feel are directly connected to breast implants.

The symptoms may include fatigue, chest pain, headaches, chills and chronic pain. 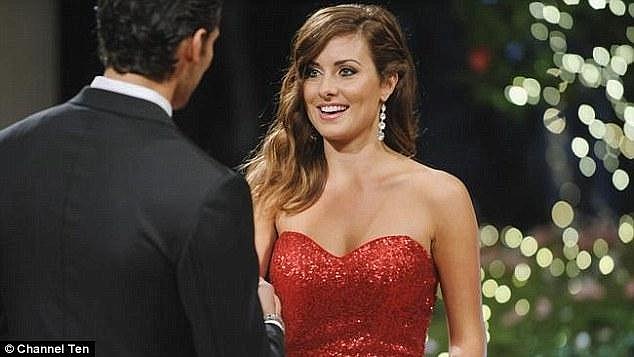 Remember this? Sarah-Mae appeared on Tim Robards’ season in 2013 (pictured)

What is breast implant illness?

Breast implant illness (BII) is a term used by women who have breast implants and who self-identify and describe a variety of symptoms they feel are directly connected to their saline or silicone, textured or smooth breast implants.

However, there is no definitive epidemiological evidence to support a direct link between breast implants and any specific disease process.

How to live longer: The 55p ingredient that may prevent the development of certain cancers 0

Trump claims far left 'brainwashed' Biden in 'Hannity' exclusive: 'He doesn't know what he is doing' 0