Ariana Grande got affectionate with her boyfriend Dalton Gomez at her festive horror film–themed birthday party on Friday.The pop singer–songwriter


Ariana Grande got affectionate with her boyfriend Dalton Gomez at her festive horror film–themed birthday party on Friday.

The pop singer–songwriter shared a bounty of photos from her 27th birthday, including a sweet picture of Dalton, planting a kiss on her cheek.

Her party was decked out in lovely floral arrangements, inspired by the sinister set design of last year’s indie horror hit Midsommar.

Ariana shared multiple photos from the party in her Instagram albums, including one showcasing her romance with Dalton.

The two locked lips in the romantic shot and looked as if they were both about to burst into smiles.

The Thank U, Next singer was dressed in a brilliant white sweater crop top that revealed a bit of her toned tummy, which she paired with a lustrous white satin skirt and a towering flower crown that paid homage to Florence Pugh’s headgear in Midsommar.

‘So my friends surprised me [with] a theme….’ she wrote on an Instagram Story photo of the crown.

‘okay i am done with birthday spam ☁️ thankful and here and very much 27,’ she captioned a selfie of the outfit sans flowers.

Ariana also included some photo booth–style black and white pictures with her friends. 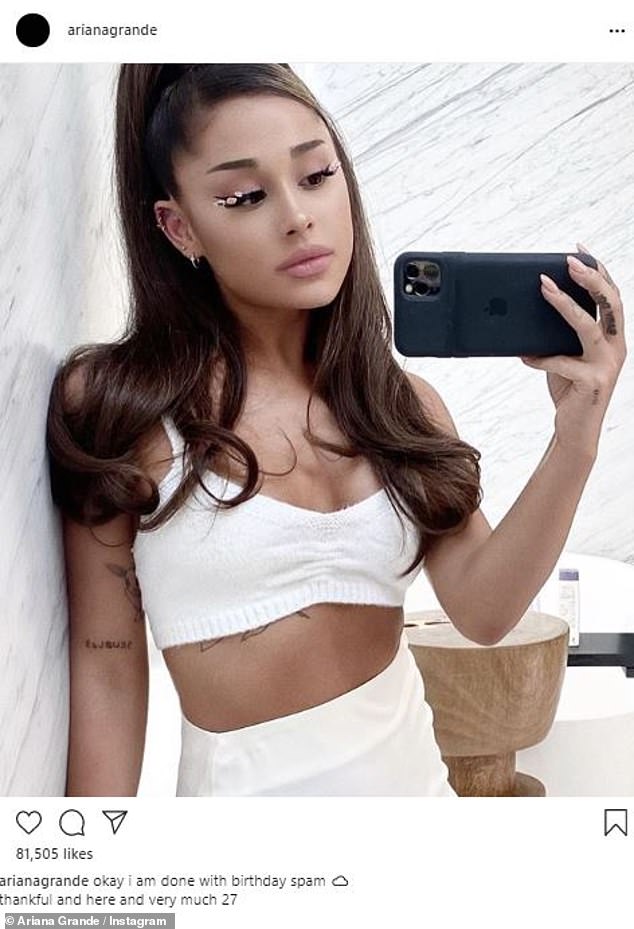 Woman in white: The Thank U, Next singer was dressed in a brilliant white sweater crop top that revealed a bit of her toned tummy, along with a white satin skirt and white heels 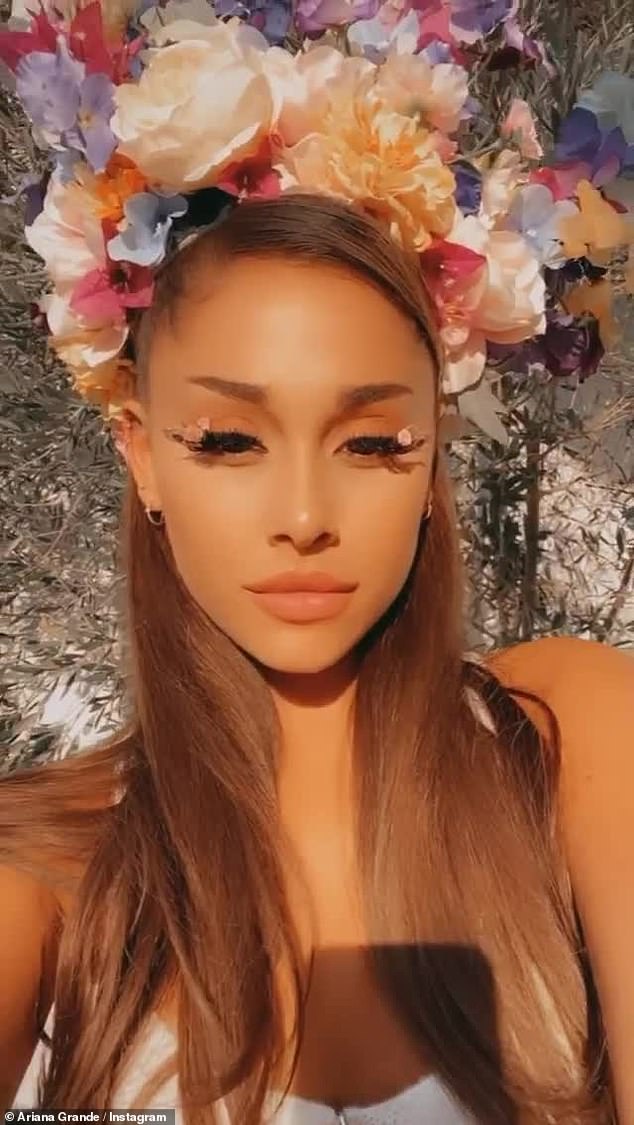 Sweet display: Ariana Grande shared a loving kiss with her boyfriend Dalton Gomez while celebrating her 27th birthday on Friday 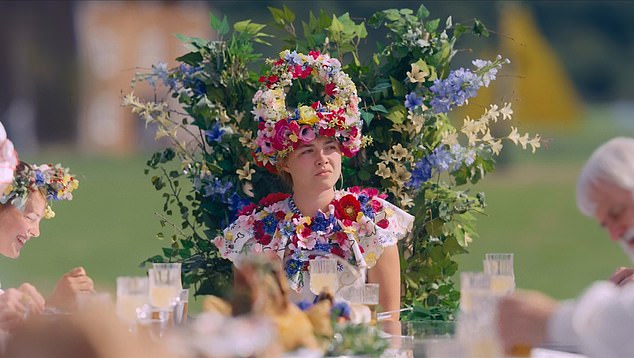 She flashed an angelic smile while posing with her pal Victoria Monet, who wore a dark crop top and a mesh-covered skirt, and Tayla Parx, who rocked a retro striped sweater.

Her parents Joan Grande and Ed Butera got friendly with their daughter’s dogs in another snap.

Although some of her guests had been staying in her Beverly Hills home in recent days, most presumably had been living elsewhere, increasing the possibility of coronavirus contamination.

Only a few people were pictured in the photos wearing a mask, and no one appeared to be social distancing, even as California has seen a rise in positive coronavirus tests and planned reopenings have been canceled. 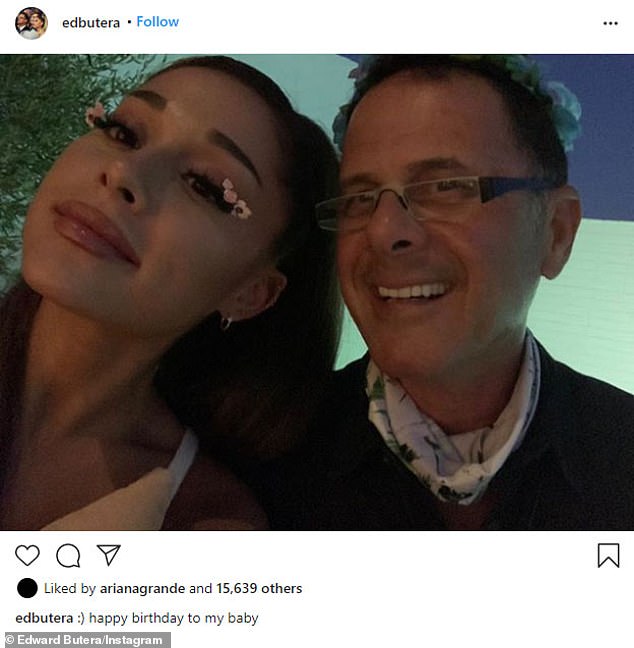 Hanging out: She posed for multiple snaps with her friends and got another kiss on the cheek from Dalton. She and her father both posted a sweet selfie together

Ariana’s half-brother Frankie Grande rounded out her family members for the birthday bash.

He had his own more conservative flower crown as he posed by her pool with their mother Joan.

Dalton was featured in another color photo as he gave Ariana a sweet peck on the cheek while she gazed innocently back at the camera and wrapped her arms around his neck.

The 7 rings singer appended a selfie to the more professional photos featuring her beaming father.

Another post gave a clearer view of Ariana’s flower crown and helped explain the Midsommar connection.

‘my friends and i went with a midsommar theme because help me,’ she joked in the caption.

Her white outfit also complemented the lacy white outfit Florence Pugh wore in a dramatic final scene in the horror film, which was directed by Hereditary’s Ari Aster.

The look was a big hit with that movie’s star.

‘Mayqueeen!! Now have some mushroom tea,’ the Little Women actress wrote on one of Ariana’s Insta Stories.

The slow-burn horror film follows an American woman (Pugh) who tags along with her boyfriend and his friends when they visit a remote village that’s home to an agrarian Swedish cult.

The critically and commercially successful film digs into her disintegration relationship with her distanced boyfriend, even as the villagers concoct sinister purposes for the visitors. 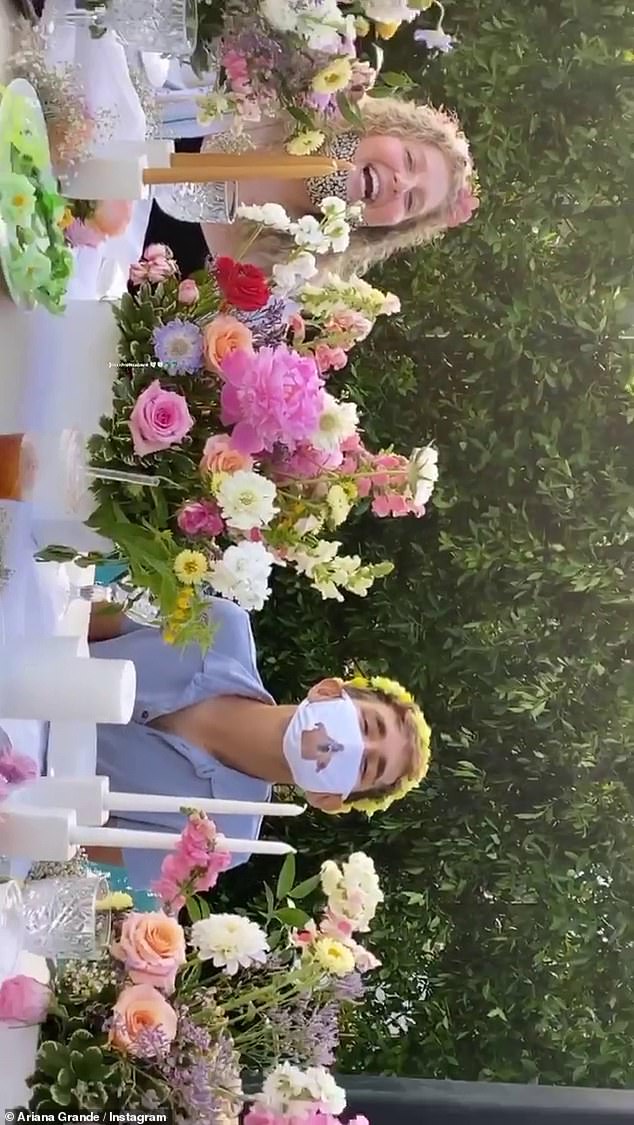 Almost creepy: Ariana posted a short clip to her Insta Stories of a flower-covered dining table outdoors resembling a sinister meal from Midsommar

The Break Up With Your Girlfriend singer completed the themed look with an intricate flower dress on a mannequin.

Though it was mostly for display, Ariana put it on to take a few photos.

The original prop was acquired by the Academy Museum of Motion Pictures, which puts on the Academy Awards every year, from an auction by indie film studio A24 with a $65,000 winning bid.

Ariana put in her own bid on the dress, though she wasn’t successful. 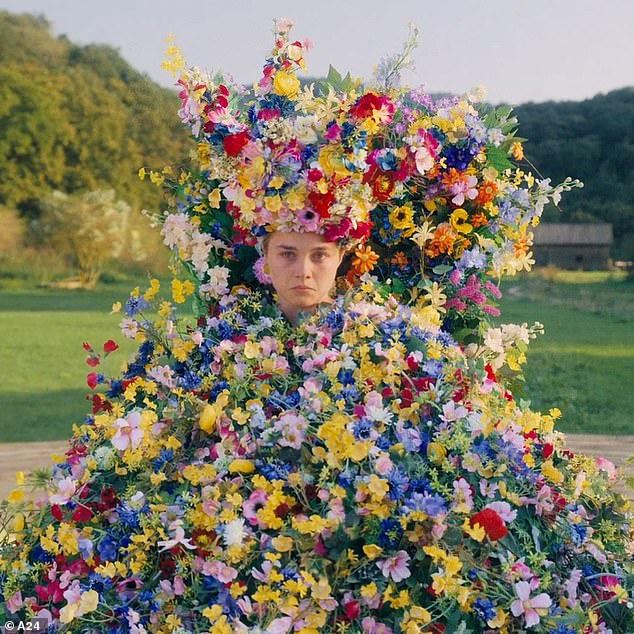 Call back: Ariana was dressed in a white sweater crop top, white satin skirt and a flower crown inspired by the opulent flower dress Florence Pugh wore in Midsommar, which sold at auction for $65,000 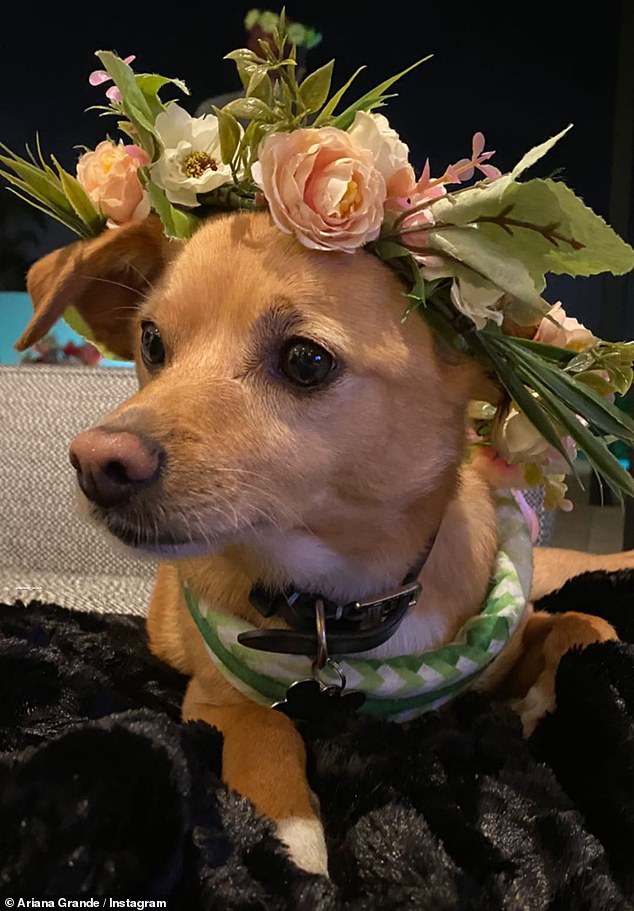 Part of the family: Ariana’s pets even got in on the festivities, and she shared a cute closeup of one of her dogs with its own modest flower crown 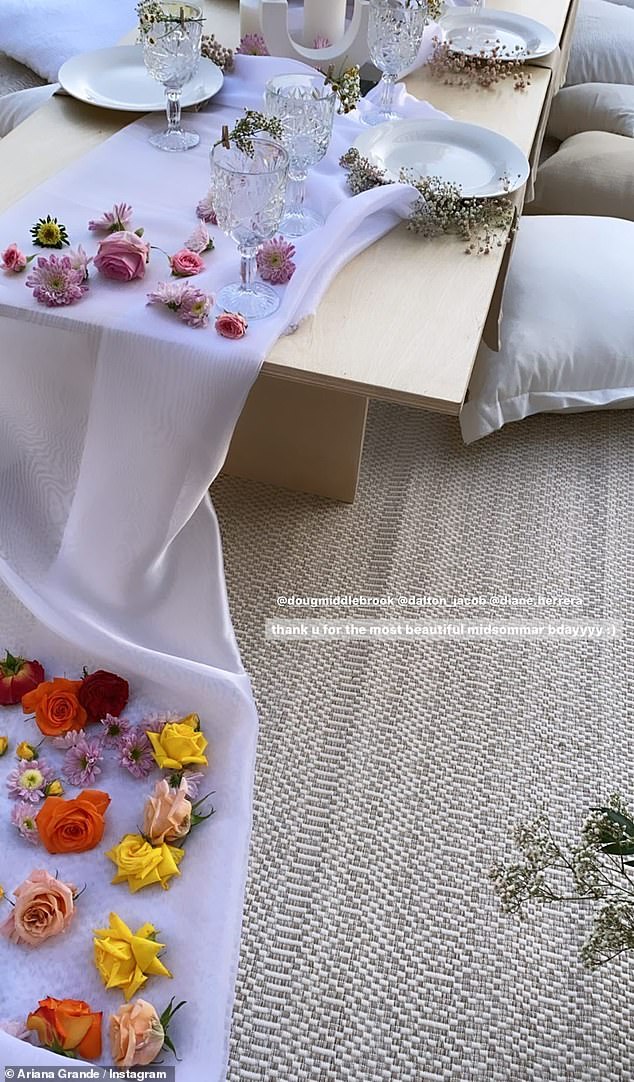 Elegant: In addition to the headwear, her flower supplier had sprinkled gorgeous arrays throughout her massive home

Ariana’s pets even got in on the festivities, and she shared a cute closeup of one of her dogs with its own modest flower crown.

In addition to the headwear, her flower supplier had sprinkled gorgeous arrays throughout her massive home.

Ariana didn’t share much about her birthday gifts, but one present appeared to be a graffitied toy Mercedes, which a masked friend took for a drive. 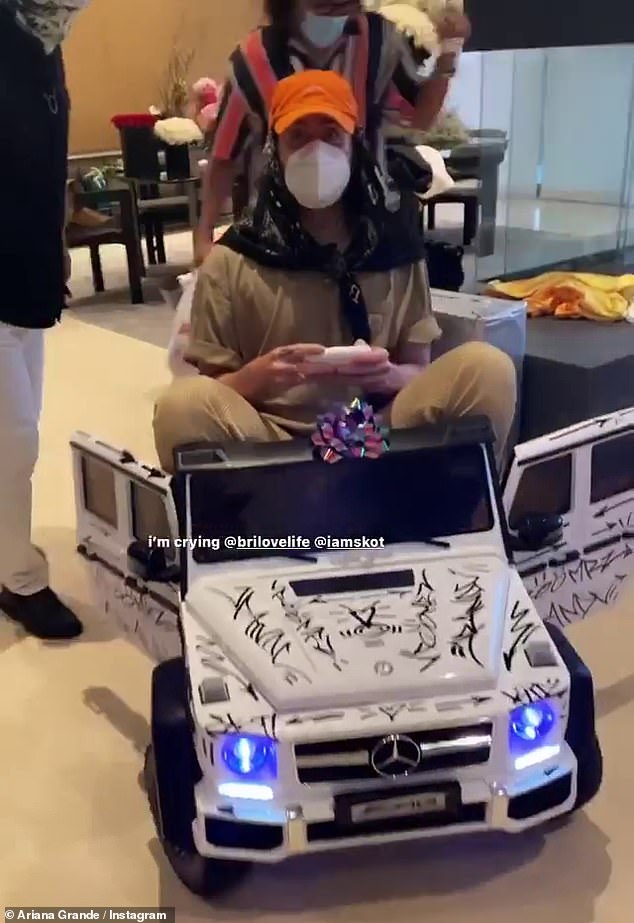 Sweet wheels: Ariana didn’t share much about her birthday gifts, but one present appeared to be a graffitied toy Mercedes, which a masked friend took for a drive

Amanda Holden's daughter Hollie, 8, recreates a photo of her grandmother taken 77 years ago 0

Virgo love horoscope 2020: What sign does Virgo fall in love with? 0