THE Apprentice candidate Lewis Ellis has been met with a barrage of hate from trolls after Lord Sugar branded his tattoos “horrific”.

Lewis, 29, stripped down to his swimming shorts for a campaign to promote summertime in Finland but was met with harsh criticism from the business tycoon. 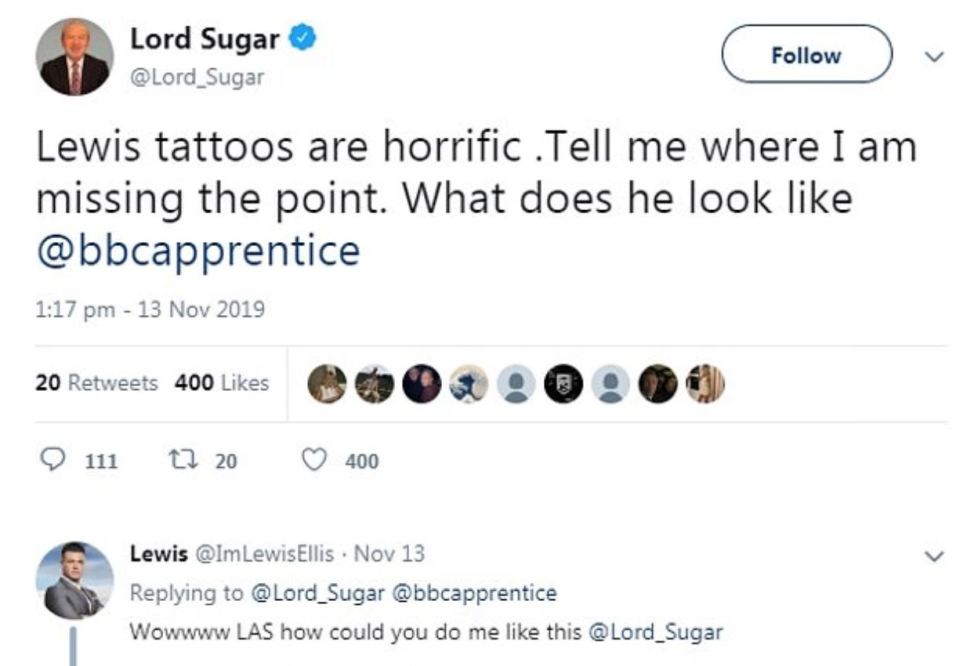 Lord Sugar wrote on Twitter with a picture of Lewis without his top: “‘Lewis tattoos are horrific. Tell me where I am missing the point. What does he look like @bbcapprentice”

An insider told the MailOnline that Lewis was encouraged to go topless when he wasn’t overly comfortable doing so.

The source said: “One of the female candidates wasn’t happy to get into a bikini for the scenes so Lewis felt forced to do it. Which isn’t fair. If she wasn’t body confident it doesn’t automatically mean everyone else is.

“Lewis had hidden his tattoos up until that point but this task meant he had to show them. And because of Lord Sugar’s old-fashioned views, he has commented on Twitter and opened the floor to all the trolls to attack Lewis. It’s not right!”

Lewis, a marketing manager, look to Twitter to defend his ink, writing: “Back to rule #1 f*** what people think about you! Thank you to everyone that took time to show some support for my “horrific” tattoos and pointing out that no one has the right to judge you or your body.”

But Lord Sugar replied with: “Lewis your tattoos tell your story. What are you a Kindle. You have the right to do what you want with your body.

“I have the right of an opinion. I say they are horrible.

“When you’re 50 on the beach you’ll wear a T shirt. You will be an embarrassment to your kids.”

The BBC candidate replied to the business giant with: “Okay Boomer…” and pinned the Tweet to the top of his wall. 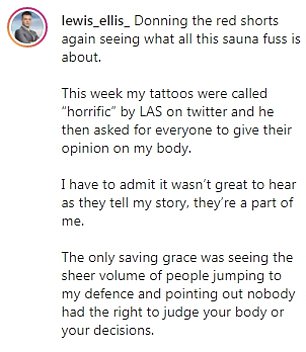 Lewis has receieved support from followers but has also faced backlash. The source said: “A lot of people have defended Lewis on Twitter, after that remark, but he’s also received lots of nasty DMs about how disgusting tattoos are.

“He’s someone who can laugh that stuff off, but it’s not fair for Lord Sugar to provoke trolls like that.”

Some trolls wrote that Lewis should be “ashamed of himself” and that his body art is “disgusting”.

But others jumped to his defence. One tweeted: “Nothing wrong with tattoos mate.

“They don’t make us lesser people,” as another posted, “Body shaming! Tut tut!”

Lewis shared a picture of him in a sauna, taken during the filming of the show, and shared it on Instagram.

MOST READ IN TV AND SHOWBIZ


Katie Price's son Junior, 14, hits back at troll who slated her on Instagram

'Give us a break'

He wrote: “This week my tattoos were called “horrific” by LAS on twitter and he then asked for everyone to give their opinion on my body. I have to admit it wasn’t great to hear as they tell my story, they’re a part of me.

“The only saving grace was seeing the sheer volume of people jumping to my defense and pointing out nobody had the right to judge your body or your decisions.”

Lewis, who has tattoos of a man walking between two paths, a ferris wheel and cogs, say they represent “Never conforming, not being the same as everyone else, and never being part of a machine.”

Parents’ agony as ‘bubbly’ son, 4, dies after taking a nap in ‘tree house’ at creche

John Boyega admits secret Star Wars script he lost after leaving it under his...

Arsenal acted like a ‘pub team’ in allowing Pepe to take crucial penalty over...

How to sleep: Drink barley grass powder to get a good night’s sleep

UFC legend Daniel Cormier will become an “awesome wrestler” if he makes a sensational switch to WWE. That’s the opinion of friend and fellow...

THE chief suspect in the gangland murder of a decapitated boy received a death threat — from inside a court house. The Irish Sun...

A LITTLE boy died after taking a nap in an indoor tree house at creche, an inquest heard. Autistic Cillian O’Driscoll, four, was discovered...

Type 2 diabetes happens when the pancreas that produces the hormone insulin cannot produce enough insulin or doesn’t produce any at all. Insulin...

Grieving parents plead with US diplomat’s wife to be ‘humane’ over...

Credit cards and Christmas can be a dangerous mix