She loves to show off her stellar fashion sense with a range of stunning ensembles.

And Amanda Holden opted for a more elegant look on Monday as she left the studio after presenting her Heart Radio Breakfast Show in London.

The TV personality, 49, looked sensational in a figure-hugging pale blue corded lace dress from her own collection with clothing brand Fenn Wright Manson. 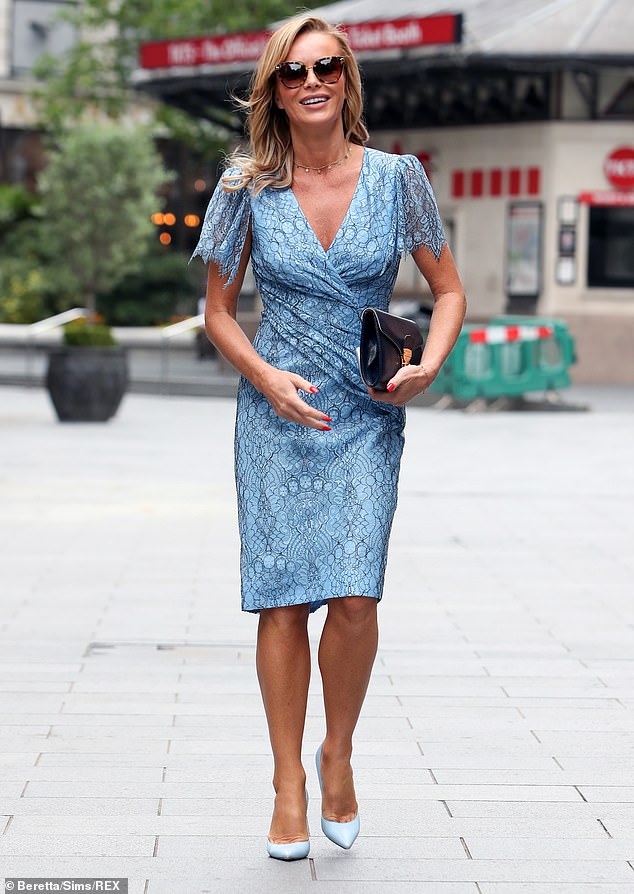 Stylish: Amanda Holden, 49, looked sensational in a figure-hugging blue corded lace dress as she left the studio after presenting her Heart Radio Breakfast Show in London on Monday

Amanda’s dress, which was named after Kate Middleton, boasted an asymmetric ruching which highlighted her svelte figure and stylish cape sleeves.

Never one to forget her accessories, Amanda toted a black patent clutch bag and donned a pair of stylish tortoiseshell frame sunglasses.

To complete her look, which was designed as a perfect wedding or summer party outfit, the star added a pair of pale blue heels.

Amanda wore her blonde locks down and curled, letting her tresses sit gently on her shoulders. 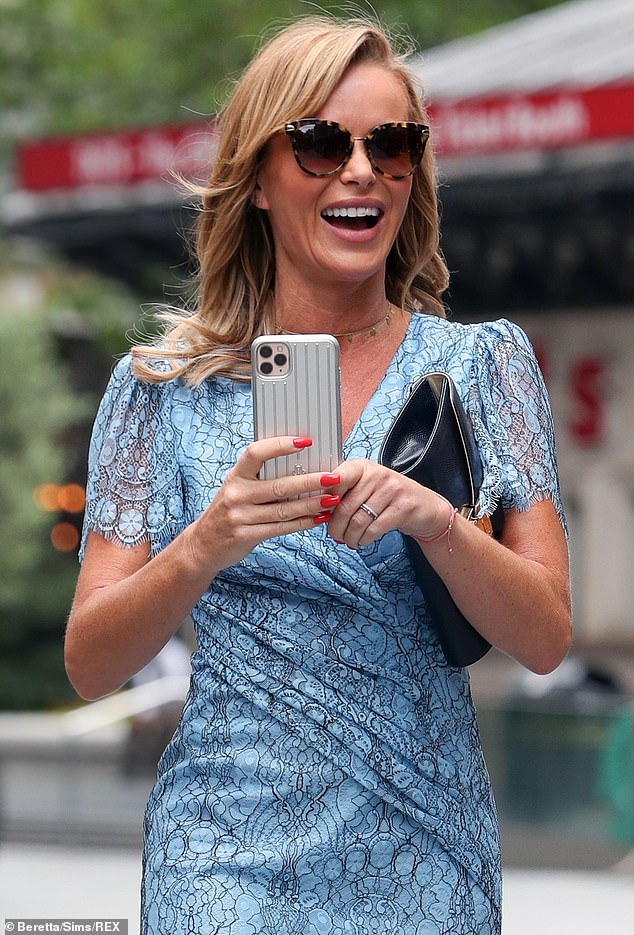 Smiles: The presenter appeared to be in good spirits as she laughed and held up her phone

Work it: The glam TV star made sure to work all her angles as she paraded down the street

Her appearance comes after Amanda teased some big changes for her hit ITV show Britain’s Got Talent during her Breakfast Radio show last week.

Speaking on Thursday morning, the BGT judge updated fans on how the final of the 2020 series will work.

Days after reports suggested bosses were considering filming the postponed live shows without a studio audience, Amanda insisted ‘we remain hopeful that there’ll be a big family audience for BGT.’ 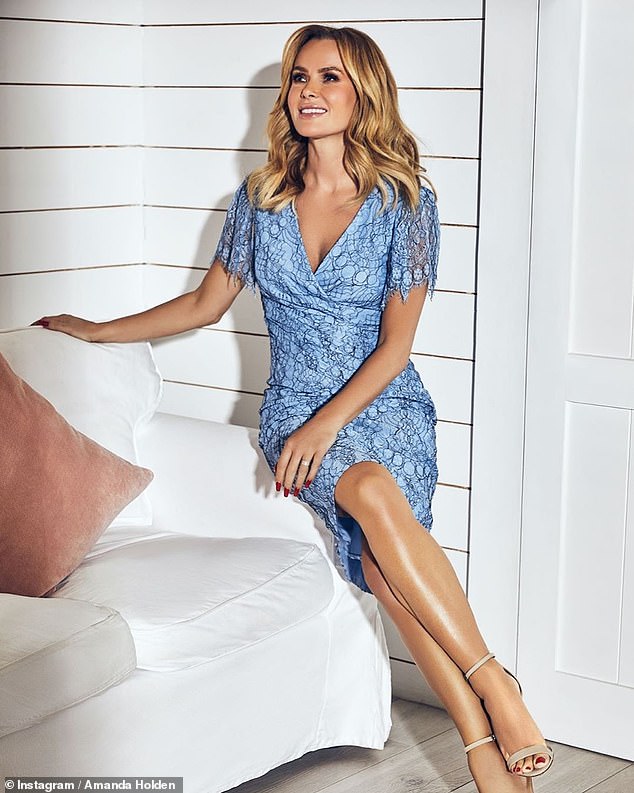 Glowing: Amanda also shared a snap of her dress, which boasts a plunging front, on Instagram

Larking around: The presenter put on an animated display as she stepped out in London 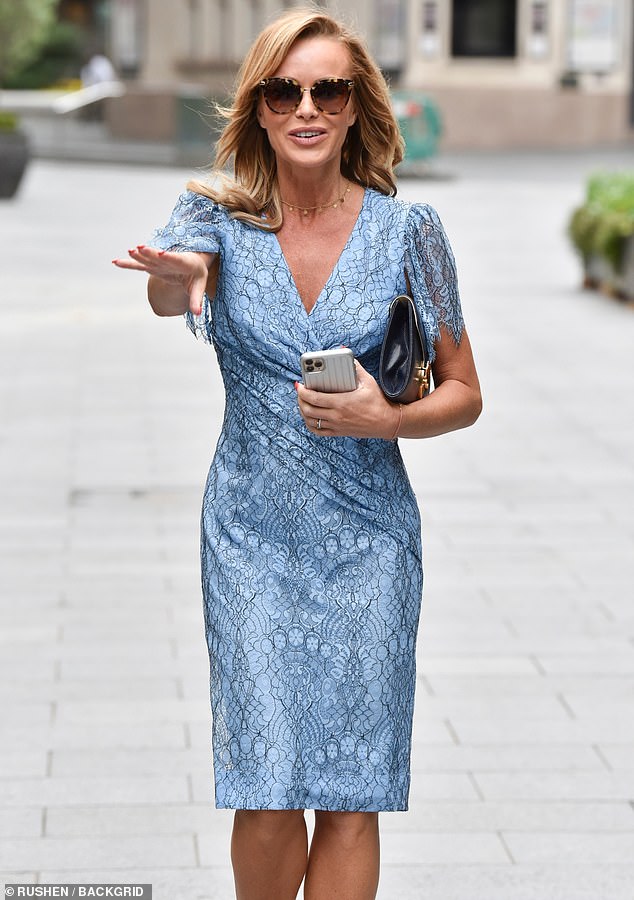 Gorgeous: Amanda wore her blonde locks down and curled, letting her tresses sit gently on her shoulders

Amanda’s Heart Radio co-presenter Ashley was keen to know more, revealing ‘Amanda, yesterday you teased us that there might be a little BGT update, something about maybe an audience, I believe?’

‘Well, yes. I do,’ Amanda replied. ‘I spoke to the producers yesterday and we remain hopeful that there’ll be a big family audience for BGT and I’m just going to say, we will be leading the way for the future in TV in how people will watch our show live.’

‘Leading the future?’ Ashley asked. ‘We will be leading the way,’ promised Amanda. 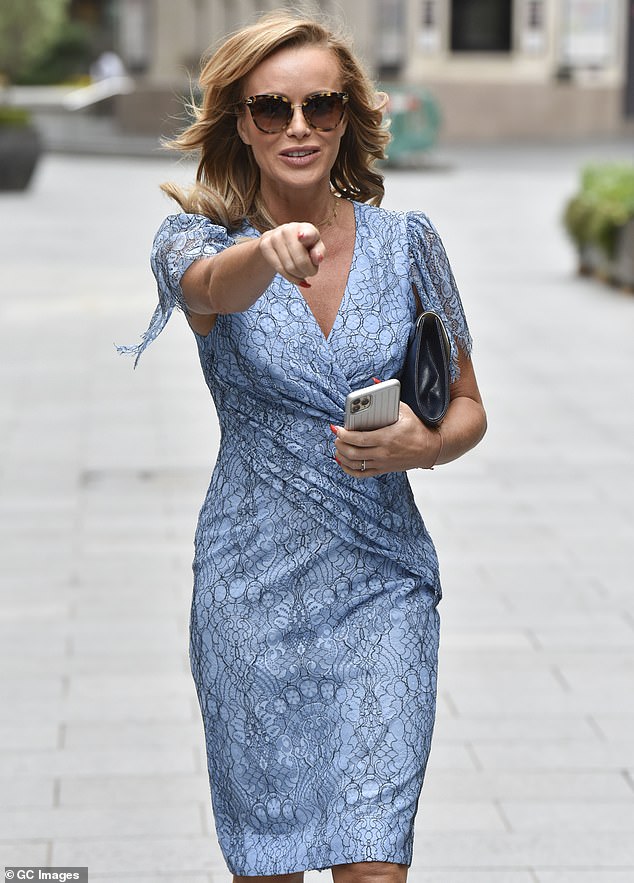 On her way: She pointed towards the camera and smiled as she rocked the lacy blue outfit 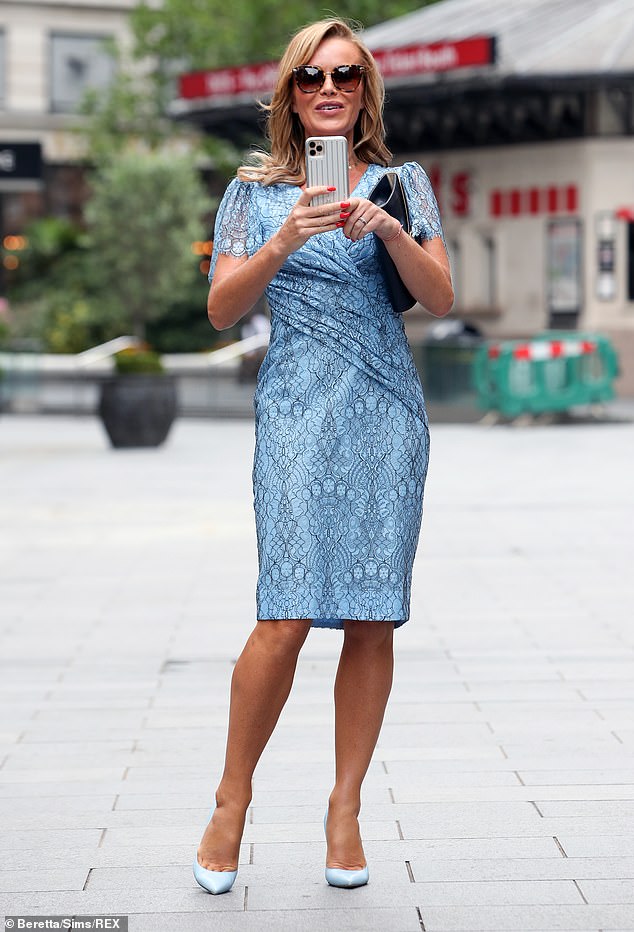 All in the details: Amanda toted a black clutch bag and donned a pair of stylish tortoiseshell frame sunglasses

Amanda remained tight-lipped about the details though, leading a frustrated Ashley to joke ‘Are you just teasing us? You won’t give us any more information?’

‘I can’t!’ insisted Amanda. Fellow presenter Jamie Theakston asked: ‘Are you talking about the live audience?’ getting a ‘yes’ from Amanda.

‘The studio audience?’ Jamie pressed. ‘Yes, we’re going to be leading the way on how our audience sees Britain’s Got Talent this year,’ clarified Amanda.

‘Watch and learn people. I’m not giving it away because I don’t want all the other shows to nick the idea [laughs].’ Jamie laughed though as he questioned ‘Do you really understand it yourself?’ ‘No!’ agreed Amanda. 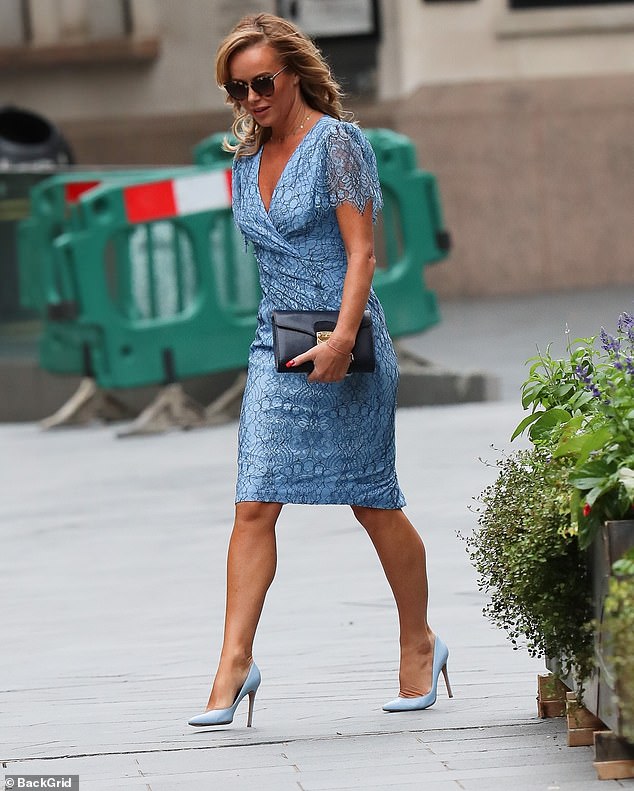 Beauty: Amanda added a delicate necklace and bracelet to complete her elegant look

Wasp sting: What can I put on a wasp sting? Simple home remedies 0

Tina Malone, 57, takes a brief break from her acting class 0

Rep. Doug Collins: Why do Dems support anarchist activity over law and order? 0