Home News 84% of Sun readers want Prince Andrew to go to the US...

A MAJORITY of Sun Readers want Prince Andrew to go the US to face the FBI over his links with is paedo pal Jeffrey Epstein, a poll has revealed.

The Duke of York has been facing mounting pressure to speak to American authorities over his friendship with the dead financier and allegations he was forced to sleep with “sex slave” Virginia Roberts three times when she was 17. 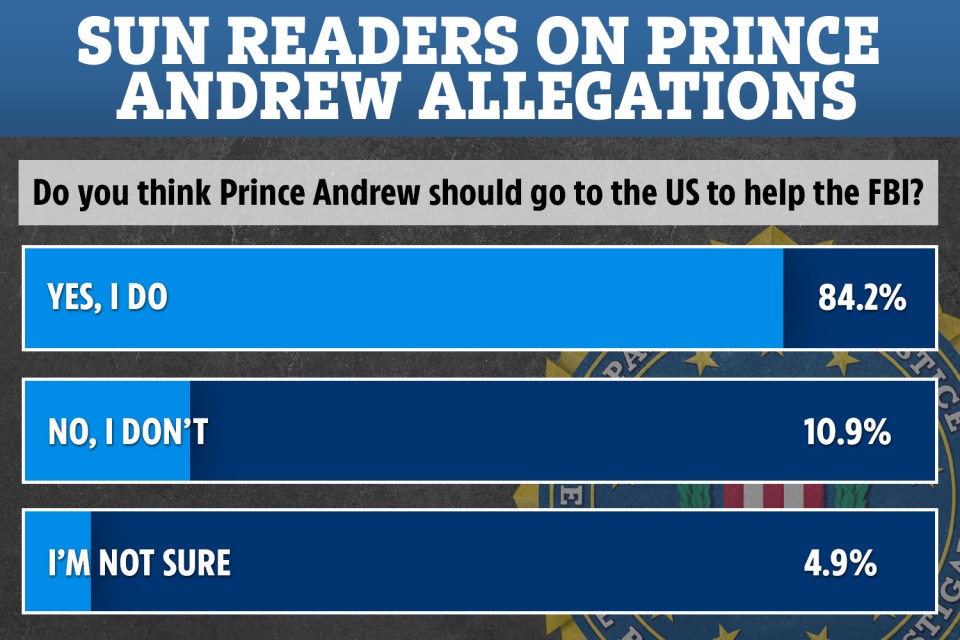 Virginia Roberts breaks down in tears talking to BBC Panorama[/caption]

Now, 84 per cent of Sun Readers think the 59-year-old royal should go to the US, while just 10 say he shouldn’t and less than five per cent are not sure.

Prince Andrew‘s accuser spoke to BBC Panorama on Sunday night after the Duke gave a car-crash interview to Newsnight last month denying the allegations against him.

The Duke of York said last month would testify under oath “if push came to shove”.

Ms Roberts, now 35, says she was trafficked for sex by US billionaire Epstein and flown by private jet to London where she was ordered to have sex with Prince Andrew.

She alleges she was later forced to have sex twice more in New York and the US Virgin Islands as a 17-year-old in 2001.

Prince Andrew has strongly denied the allegations against him and told Newnight’s Emily Maitlis he has ‘no recollection’ of the photograph being taken at Ghislaine Maxwell‘s Belgravia home in 2001.

Ms Roberts says the picture shows the pair together on the first floor of Ms Maxwell’s home on the night she was forced to have sex with him as a 17-year-old in 2001.

He knows what happened. I know what happened and there’s only one of us telling the truth, and I know that’s me.

Friends of the prince have questioned whether the picture is a fake and said his fingers are much “chubbier” in real life than the ones in the photo.

Ms Roberts told the programme a date on the back of the photo shows it was printed on March 13, 2001 – just two days after it was taken.

Prince Andrew said on Newsnight he couldn’t have possibly met Ms Roberts on the night in the question because he was at a Pizza Express in Woking.

The picture was first published in 2011 after Prince Andrew visited Epstein in New York three years after his conviction for soliciting a minor for prostitution.

Prince Andrew also claimed during his shambolic interview that the notorious picture of him with Epstein in walking through Central Park was taken when he went to break off his friendship with the paedo.

Ms Roberts said on Panorama said: “It’s an authentic photo, I have given it to the FBI. There’s a date on the back of the it from when it was printed.

“The people on the inside are going to keep coming up with these ridiculous excuses.

“Like his arm was elongated or the photo was doctored, or he came to New York to break up with Jeffrey Epstein. I mean, come on, I’m calling BS on this, because that’s what it is.

“He knows what happened. I know what happened and there’s only one of us telling the truth, and I know that’s me.”

In 2015, a US judge struck out Ms Roberts’ allegations against the Prince for being “immaterial and impertinent” in a lawsuit against Maxwell.

A leading lawyer yesterday said the under-fire royal should “plead the fifth” unless promised immunity from prosecution in the US.


Andrew begged Ghislaine for help in 5.50am email after 'sex slave' accused him


Teaching assistant dad, 31, found dead days after pupil 'hit him with a chair'

Former prosecutor Julie Rendelman said she would advise clients to be wary if subpoenaed by a grand jury if there is any possibility they are the subject of an investigation.

“Unless they’re being given immunity, then as an attorney who believes that a client potentially has risk of criminality or criminal liability, I would tell them to plead the fifth,” Rendelman told the Guardian, referring to the right against self-incrimination.

“There’s nothing to be gained by talking to a grand jury without immunity in those circumstances.”

Epstein was first jailed in 2008 for procuring an underage girl for prostitution.

He got an 18-month sentence, during which he was able to go on “work release” to his office six days a week. He was released on probation after 13 months. 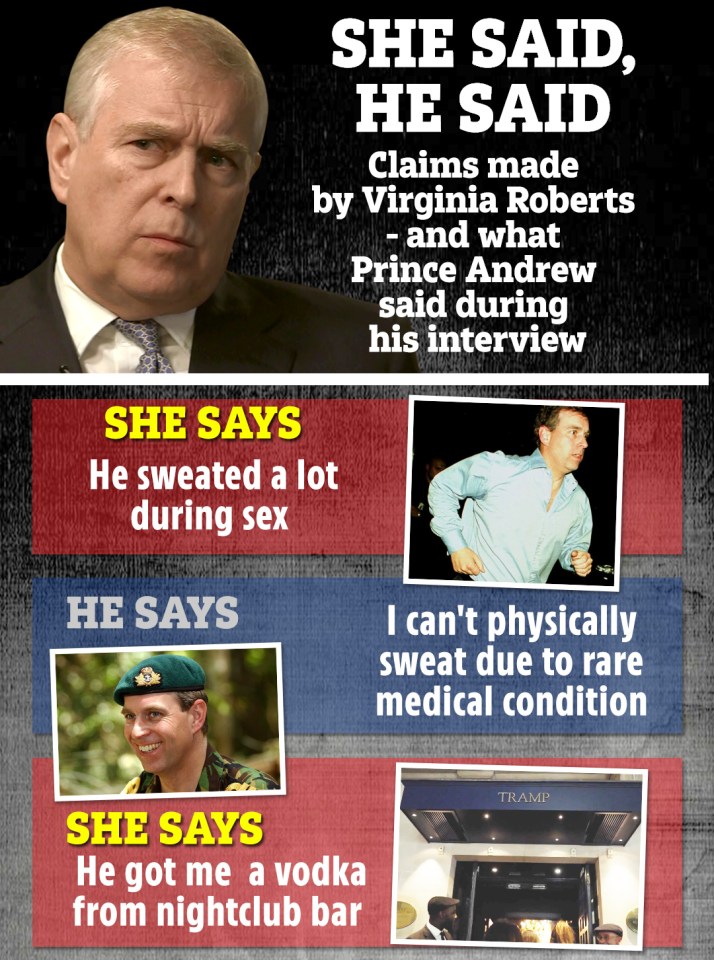 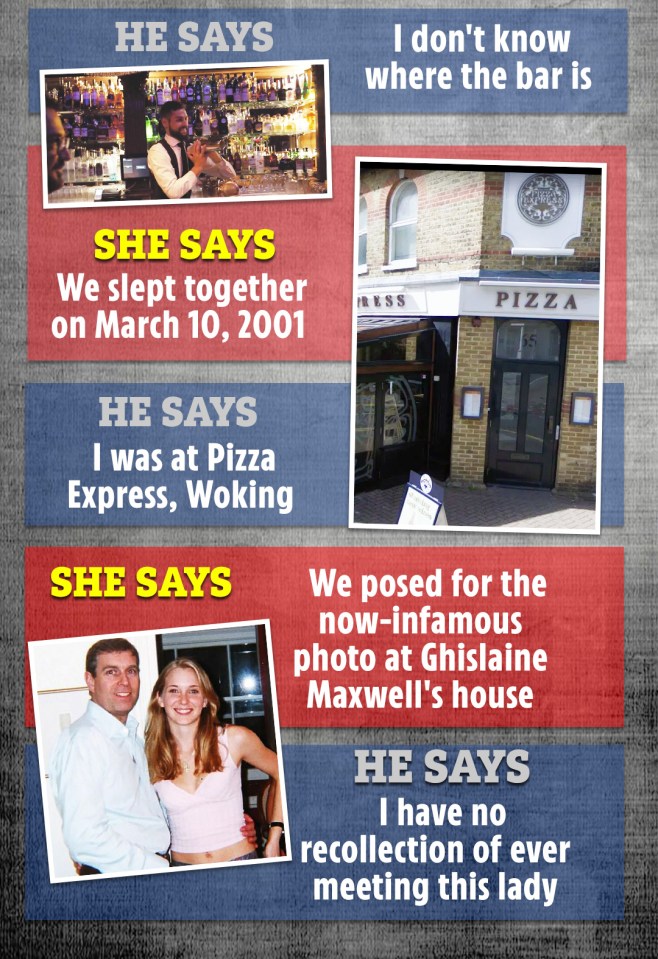 Failed IVF is not the end of the world… you can be childless and...

Barnsley fan dies towards end of 2-2 draw with Derby at Oakwell despite medics...

Vitamin D: Nausea, vomiting and loss of appetite could signal too much vitamin D

KURT ANGLE has revealed who would make his Mount Rushmore of wrestling – but there would be no room for WWE champion Brock...

As Harry and Meghan visit South Africa, women and children there...